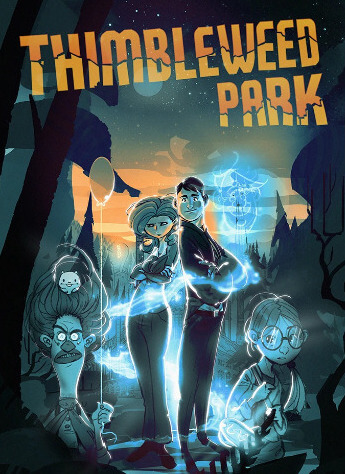 Thimbleweed Park is a point-and-click adventure game developed by Ron Gilbert and Gary Winnick for Microsoft Windows, macOS, iOS, Xbox One, PlayStation 4, Linux, Android, and Nintendo Switch. The game was revealed on November 18, 2014, along with a Kickstarter crowdfunding campaign with a goal of US$375,000, and was released on March 30, 2017.

The game is a spiritual successor to Gilbert and Winnick's previous games Maniac Mansion (1987) and The Secret of Monkey Island (1990), and is designed to be similar to graphic adventure games released in that time period, both visually and gameplay-wise.

The game is played similarly to early graphic adventure games; it is seen from a third person perspective, with a view of the area taking up the majority of the screen, while the bottom portion is taken up by the player's inventory and a list of verbs, such as "use", "pick up", and "talk to". By clicking on a verb followed by one or two items or characters, the player character will attempt to perform the action described. An example given in the reveal trailer was "Use balloon animal with corpse", performed by clicking on the verb "use", the "balloon animal" item in the player's inventory, and a corpse found in an area in the game.

The game has five different player characters which the player can switch between in the middle of gameplay, similarly to Maniac Mansion.

FBI agents Ray and Reyes arrive at the town of Thimbleweed Park to investigate a murder. Their investigation leads them to several persons of interest: Chuck, the recently deceased owner of the PillowTronics robotics company; Ransome the Clown, cursed to wear his makeup forever after going too far in his insulting performances; Delores, computer programmer and niece of Chuck; and Delores's downtrodden father Franklin.

Franklin attempts to pitch his business ideas to Chuck, but is murdered at the town hotel and becomes a ghost. Delores discovers that Chuck has written her out of his will, angered by her choice to pursue a career in video games. Ray and Reyes gather blood samples, fingerprints, and photographic evidence, and arrest vagrant Willie, who protests his innocence. They leave town, but return incognito to pursue other agendas: Ray has been tasked with stealing computer secrets, and Reyes wants to clear his father of causing the fire that burnt down the PillowTronics factory.

Ray, Reyes, Delores and Ransome infiltrate the factory. Delores disables the security systems and discovers that Chuck has uploaded his personality into the factory computer. Chuck reveals that everyone in the town is trapped inside a video game that keeps repeating, and that the group must free themselves by deleting the game.

Ransome apologises to the citizens of Thimbleweed Park, clearing his reputation. Franklin says goodbye to his daughter and disappears to the afterlife. In the local paper, Reyes publishes a confession from Chuck clearing his father of blame for the factory fire. Ray steals a game design document from game designer Ron Gilbert and is transferred out of the game by her employers. Delores enters the "wireframe world", a prototype version of Thimbleweed Park with simplistic graphics, and shuts down the computer.

On November 18, 2014, Gilbert posted an update to his blog, in which he revealed that talks about the game had begun "several months ago" while he and Winnick had been discussing how fun their time developing Maniac Mansion at LucasArts (Lucasfilm Games at the time) had been, and how they liked the "charm, simplicity and innocence" of the adventure games of that era. Winnick proposed that they should make a new game in the style of their old ones; as such, it is designed as if it had been made in 1987 and as if it were "an undiscovered LucasArts adventure game you've never played before". Gilbert agreed, and suggested that they should crowdfund it on Kickstarter.

Development started with Gilbert and Winnick building the game's world and story, designing puzzles using puzzle dependency charts, and creating characters around the puzzles. From the start, Gilbert says, they wanted to parody the TV shows Twin Peaks, The X-Files, and True Detective. The game's production was planned to last for 18 months, with Gilbert programming, Winnick producing art, and both writing and designing. Six months into development, an additional artist and programmer was hired along with a part-time musician. Development began on January 2, 2015.