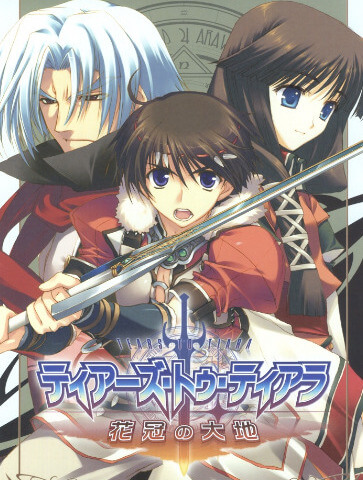 Tears to Tiara (ティアーズ・トゥ・ティアラ, Tiāzu tu Tiara) is a Japanese adult tactical role-playing game developed by Leaf. It was first released for Windows on April 28, 2005 in Japan. Then it was followed by a 12-years-old and up version called Tears to Tiara: Garland of the Earth (ティアーズ・トゥ・ティアラ -花冠の大地-, Tiāzu tu Tiara: Kakan no Daichi) released for the PlayStation 3 platform on July 17, 2008 in Japan, Hong Kong, and Taiwan in which the adult content was removed. This port also contained several enhancements and additional scenarios including new character designs and changed the original 2D gameplay to 3D.

The game draws heavily from Welsh, Celt, Christian and Roman mythology, with characters named Arawn, Arthur, Epona, Llŷr, Morgan, Pwyll, Rhiannon, and Taliesin. Set in a Late Antiquity-inspired fantasy setting, story starts on an island Erin (or Hibernia, as shown on an in-game map) on the west border of the Holy Empire.

Prologue is centered around the precognition-gifted priestess of the Gael tribe, Rhiannon. She is kidnapped by a rogue priest of the Holy Empire, Drwc, to be used as a sacrifice in a ritual meant to resurrect the Demon King Arawn and put Drwc in his favor. As a response the Gael people burn their village and swear to bring Rhiannon back or exact revenge on the Empire. In the middle of the ritual, as the Gael people attack Drwc's soldiers, Arawn is resurrected and offered Rhiannon. At this point, he kills Drwc, frees Rhiannon, and proclaims no intention in wreaking havoc which the legends attributed to him. Instead, he shows interest in Rhinannon's brother Arthur, the First Warrior of his tribe. Rhiannon, on the other hand, falls in love with Arawn, and by declaring her decision to marry him, makes him the chieftain of the Gael tribe (hers and Arthur's father was the previous chieftain, but Arthur could not assume the title due to being the First Warrior).

As the prologue ends, point of view is switched from Rhiannon to Arawn, revealing him to be the protagonist of the game, and the story continues with the exodus of Gael tribe to the neighboring island of Albion (or Insula Britannica, as shown on an in-game map) in hope of eluding the Empire.

The title was later remade and released as a B rated game, titled Tears to Tiara: Garland of the Earth (ティアーズ・トゥ・ティアラ -花冠の大地-, Tiāzu tu Tiara: Kakan no Daichi) for the PlayStation 3 on July 17, 2008 with two different editions, a limited edition and a regular edition. It has additional scenarios, 3D gameplay and the change of character designs if compared to the Windows version. The limited edition of the release contains a booklet titled as Tears to Tiara - Visual Works that features the character designs and storyboards as well as the game's original soundtrack. There was also a pre-order campaign that also includes special extras for the game such as a sticker poster set and a character voice CD that contains system voice and Tears to Tiara Radio Vol.0 (ティアーズ・トゥ・ティアラ ラジオ Vol.0, Tiāzu tu Tiara Rajio Vol.0) that features Tōru Ōkawa, Yūko Gotō and Makoto Ishii. The game also has a new character, Lidia, voiced by Miyuki Sawashiro. The titles of the opening and ending theme are "haunting melody" and "memory", both sung by Suara. An insert titled "Until" sung by Rena Uehara was also used.

Furthermore, it was first announced in the staff blog that there will also be a side story game for the PlayStation 3 port, titled Tears to Tiara Anecdotes: The Secret of Avalon (ティアーズ・トゥ・ティアラ外伝 -アヴァロンの謎-, Tiāzu tu Tiara Gaiden: Abaron no Nazo). The Secret of Avalon also has a new character called Decimus, voiced by Wataru Hatano. Tears to Tiara Anecdotes was released on September 17, 2009 and like the enhanced port, it is for the PlayStation 3 platform. The release is in two editions, a limited edition and a regular edition. Both the enhanced port and Anecdotes were also ported for PlayStation Portable.

Characters from Tears to Tiara are also playable in Aquapazza: Aquaplus Dream Match, a fighting game developed by Aquaplus with characters from various Leaf games.

The gameplay between the two versions are very different. The Windows game has the combat segments occurring in real-time while the PlayStation 3 version has been altered it to be turn based combat. In any of its version, the player and enemy AI control multiple characters of different classes such as magic user, archer, and soldier. Outside of battle the story is told through 2-D cutscenes, with gameplay proceeding much like a typical visual novel.

Family Guy: Back to the Multiverse
hit
upd
new