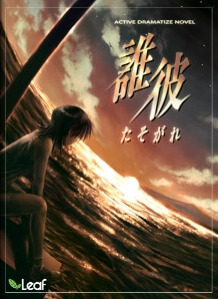 Tasogare (誰彼) is a Japanese 'active dramatized novel' eroge developed by Leaf. It was released on 2001 and was later republished in 2003. The 2003 version contains renovated graphics. For the period from January 29 to February 11, 2001 Tasogare was the best-selling bishōjo game in Japan, even though it was only released on February 9. It remained a best-seller for several months afterward as well.

Tasogare's story is about a young man who is in reality a clone developed by the Japanese army during World War II. Because of some liquids inserted into him, he developed special powers like healing and eternal youth. However, he will die if he loses too much blood. More than 50 years after the war is over, he is kept along with three other clones in a hibernation chamber. However, the man awakens when one of those clones tries to kill him. Suddenly, two girls appear and take the man home.

Semimaru Sakagami (坂上 蝉丸, Sakagami Semimaru): The main hero of the story and the character the player controls. Member of the Japanese Army.