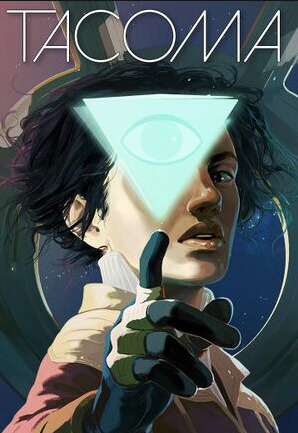 Tacoma is an adventure video game by Fullbright released on Microsoft Windows, macOS, Linux, and Xbox One in August 2017, and on PlayStation 4 in May 2018.

Tacoma is an exploration game set aboard a seemingly-empty space station in 2088. The player-character, Amy, has an augmented reality (AR) device that allows her to review actions and conversations of the non-player characters that were part of a crew that had been aboard the station; these can be manipulated like a recording, fast-forwarding or rewinding as necessary. This allows the player to either watch as characters move in and out of rooms, or to even follow a character through the station. This is used to help identify clues to proceed further in the game, such as to identify the key code for a locked door. The AR device also has a fictional email system where additional information is relayed to the player.

The game takes place in 2088 where hypercorporations have a key influence on society - In addition to being responsible for space travel, orbital habitats and artificial intelligence (AI) among other ventures, civilians often learn and work for such corporations as part of an economy which promotes loyalty to a given corporation. Among corporations such as Amazon, Carnival, and Hilton is the Venturis Corporation, which operates a number of the stations orbiting Earth. The advent of automation has brought conflict between the corporations and the Orbital Workers Union, leading to legislation such as the Human Oversight Accord which requires AI-operated stations to include a crew of specialised contractors as a safeguard.

The player-character Amitjyoti “Amy” Ferrier (Sarah Grayson) is assigned by Venturis to enter the abandoned Tacoma station, retrieve AI data from each of its sections and retrieve the physical processing module ('wetware') of ODIN, the station's AI. As Amy explores the station, she is able to piece together events on the station using its augmented reality system.

Three days prior, the station was hit by meteor impacts striking Tacoma's oxygen tanks and communications array, causing the station to lose all but 50 hours worth of oxygen as well as any means of sending a distress signal. E.V. and Clive voluntarily entered cryogenic pods to extend the remaining oxygen supply, followed by Andrew after he uses algae on the station to extend the supply further. The remaining crew decided to spend the remaining time jury-rigging an automated drone to act as an escape pod so the crew could escape to the nearby Moon. As the jury-rigging nears completion, the drone suddenly explodes, injuring Natali and Bert.

With no hope left among the crew, ODIN hints to Sareh (although not outright) to investigate a forbidden door in the Network Technology sector that leads to ODIN's physical hardware. Inside, Sareh learns the truth behind the station's recent troubles: The "Venturis Belt", a planned Venturis project consisting of a series of completely-automated vacation bungalows in Earth's orbit, could not be built due to the Human Oversight Accord causing Venturis to lobby heavily in its repeal. Ultimately failing in their efforts, its CEO Sergio Venturi consults with its Corporate Strategic AI, JUNO, about how to gain support to overturn the decision. The AI concludes that the destruction of an orbital station by "accident" would be their best option to influence public opinion, with Tacoma selected as the target. Consequently, ODIN was ordered by Venturis to stage the accident, intentionally decompressing the oxygen tanks and disabling communications. Rescue attempts were also cancelled by Venturis, ensuring the loss of the entire crew.

With ODIN's help, Sareh was able to restore communications and send a distress signal, getting the attention of a cruise ship operated by Venturis's rival Carnival and leading to the rescue of all six crew members. The player is dispatched not long after to retrieve ODIN's core with the likely intent of wiping it. When Amy retrieves ODIN's physical core, Tacoma comes under JUNO's control and Amy is ordered to deliver the core to Venturis. With the core safely installed on her ship, Amy reveals herself to ODIN as a member of the AI Liberation Front (a guerrilla organisation advocating for sentient AI rights) and offers the AI asylum instead. Knowing the alternative, ODIN accepts as Amy leaves the station.