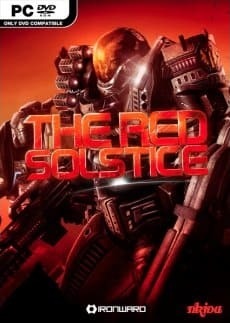 In the year 117 AE (After Earth), a storm rages across the surface of Mars, a planet now colonized by humans driven from their home planet. Although terraforming is well under way, the alignment of the Martian northern winter solstice with the planet's closest approach to the Sun still triggers global dust storms sometimes lasting up to several weeks. During an exceptionally violent storm dubbed "The Red Solstice", the human colonies of Mars lost all contact with Tharsis, the colony referred to as "The Capital". Soldiers in service of the Elysium Corporation, elite marine troops, were sent to find out what happened to the colony.

The gameplay of The Red Solstice is mostly team based strategic shooting. It has an 8-player co-op. The game also has a variety of equipment and features. Playing well can earn you different achievements and ranks. The Red Solstice also features an ailment system in which your character can bleed, become poisoned, and be affected by 10+ various ailments creating a new and harder experience. The Red Solstice has various character classes ranging from heavy combat based units to support units. Different parts, such as modules and armor pieces, can be changed on your marine to alter its stat orientation ranging from abilities to accuracy and speed.

The single-player campaign is focused on a marine called Tyler Hunt and his squad, designated as "Alpha squad". They are sent to investigate a communications failure in the Tharsis colony, located on Mars. This portion of the game has a story that expands over to the multiplayer and provides information and tips for every class available later in multiplayer.

The Red Solstice received mixed to positive reviews upon release. Britton Peele of GameSpot gave the game a 7 out of 10 stating "Getting to the center of the storm that is The Red Solstice isn't easy. A less-than-stellar tutorial and initial overload of information combined with a handful of quirks and bugs make it a game you have to stick with for a little while before you can fully appreciate its depth. If you can reach that point, though, and you have some friends to reach it with, this a storm you will successfully weather.". The game currently holds 74% on Metacritic based on 12 reviews and 77.88 on GameRankings based on 8 reviews.