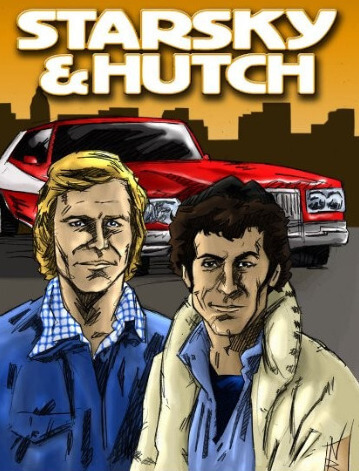 Starsky & Hutch is a vehicular combat video game by British studio Mind's Eye Productions based on the television series of the same name. The game was released for Microsoft Windows, PlayStation 2, Xbox, Game Boy Advance and GameCube.

The game follows the adventures of David Michael Starsky and Kenneth 'Hutch' Hutchinson as they clean up Bay City in their Gran Torino.

The game features asymmetric multiplayer gameplay, in which one player controls Starsky as he drives the car whilst another controls Hutch as he shoots enemies and obstacles. These can be performed with various steering wheel and lightgun peripherals, such as the Guncon 2. In single player, players can drive as Starsky with shooting either set to free or auto aim.

The game consists of three 'seasons' consisting of several 'episodes'. In each episode, players need to complete objectives, such as chasing down criminals or escorting other vehicles, whilst also keeping Viewer Ratings high. Throughout the game there are various icons the player can either shoot or drive through, offering bonuses such as increased grip, higher viewer ratings and more powerful weapons, as well as special events such as jumping off ramps.

The game has a 70s style presentation and features the original voice of Huggy Bear, Antonio Fargas.