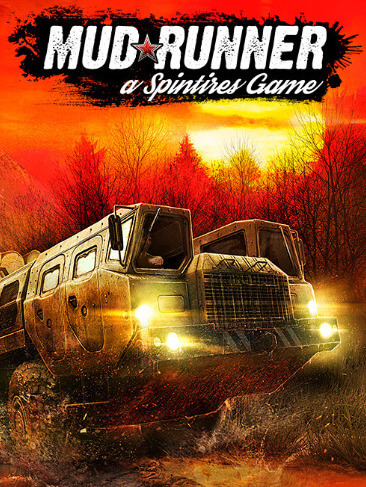 MudRunner (Formerly Spintires: Mudrunner) is an off-roading simulation video game developed by Saber Interactive and published by Focus Home Interactive. It was released on October 31, 2017 for Microsoft Windows, PlayStation 4, and Xbox One and is an upgraded continuation of the 2014 Windows-only Spintires, which was developed by Oovee Game Studios. It was later added to the Xbox Game Pass in December 2018. Similar to Spintires, MudRunner has the player control off-road vehicles as they traverse between locations to complete objectives.

MudRunner is an all-terrain simulation video game which tasks driving through muddy unpaved roads in aging Soviet vehicles with nothing but a map and a compass. The aim of the game is to transport logs to their destination without depleting resources (such as fuel) or damaging the vehicle. There is both a single-player and multiplayer co-op mode that both use the same main six maps.

The game has a new challenge mode that presents nine small maps each based around a specific gameplay function meant to teach the player the different aspects of the game. Each level also has three bonus objectives which can be completed to earn achievements; they offer no in-game rewards.

On review aggregation site Metacritic, MudRunner has aggregate scores of 67 and 72 for the PlayStation 4 and Xbox One versions of the game respectively, indicating "mixed or average reviews", and a score of 77 for the PC version, indicating "generally favorable reviews". Nintendo Life gave the Nintendo Switch version of the game a 7/10, praising the quality port to the Switch and the lush environments of the American Wilds DLC included with the game, while criticizing "frustrating design faults" from the previous version, such as the lack of an automatic navigation system.