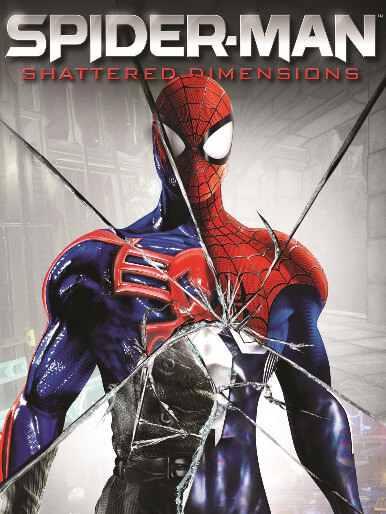 The game revolves around an artifact known as the Tablet of Order and Chaos. When it is shattered into pieces during a fight between Spider-Man and Mysterio, it causes problems with multiple Marvel Universe realities. Madame Web calls on four versions of Spider-Man from four realities to assist her in bringing the realities back into balance: the Amazing Spider-Man, Spider-Man Noir, Spider-Man 2099, and Ultimate Spider-Man, who, in their quest to recover the tablet fragments, they all have to face various villains from their own universes that already have gotten hold of the fragments, granting them new powers and, thus, making them a bigger threat than ever.

Shattered Dimensions received fairly positive reviews from critics. Reviewers generally praised the idea of bringing four Marvel universes together, and lauded the voice acting and humor, though criticism was aimed at the story, choice of villains and the overall design of the cutscenes as well as technical difficulties.

Spider-Man: Shattered Dimensions is a third-person action-adventure video game, which, unlike most previous Spider-Man games, doesn't feature an open world, but the story is rather split in 14 different levels. Each level allows the player to control of one of four versions of Spider-Man, spanning across the Amazing, Noir, 2099, and Ultimate universes, with the tutorial and the final level having the player control all four Spider-Men, one at a time. The gameplay revolves around each Spider-Man's unique superhuman abilities, with the player being able to web-swing, stick to various surfaces, use the 'spider-sense' to see enemies or objects of interest, and fight numerous types of enemies.

The wide combat of the game offers a large variety of moves, with the points necessary for buying uprgrades and new combat moves being earned from defeating enemies or completing various challenges in the "Web of Destiny". The points earned can also be used to buy 16 different alternate costumes originating from various comic book titles, 4 for each of the four Spider-Men individually: The Bombastic Bag-Man, Scarlet Spider, and Secret War Spider-Man (for the Amazing Spider-Man); the original costume concept for Spider-Man Noir, Spider-Man 1602, and Negative Zone Suit (for Spider-Man Noir); Flipside, Spider-Armor, and Iron Spider (for Spider-Man 2099); the original red and blue Ultimate Spider-Man suit, Electro-Proof Suit, and Mangaverse Spider-Man (for Ultimate Spider-Man); the fourth suit for all Spider-Men is their own unique version of Cosmic Spider-Man.

The game features numerous supervillains from the comics, whom the player engages in boss battles, usually twice in a level; in the second battle, the boss is much tougher and harder to beat, due to a new series of powers granted by a fragment of The Tablet of Order and Chaos, which the entire storyline of the game revolves around. During specific parts of the boss battles, Shattered Dimensions switches to a first-person perspective, where the player can use the analog sticks (or the Wii Remote and Nunchuk in the Wii version) to control Spider-Man's arms, punching their opponent and dodging their attacks; the punches can also be modified by holding down certain buttons.

In their path to recover the tablet fragments from supervillains, the players have to fight numerous of their "acolytes", who are different from a villain from another; the only exceptions are the Noir levels, where the only enemies encountered are generic gangsters, and the 2099 levels, where the player mostly fights Public Eye officers, although the 2099 levels still feature unique enemies beside the Public Eye. The villains featured in the game include Kraven the Hunter, Sandman, Juggernaut (for the Amazing universe), Hammerhead, Vulture, the Goblin (for the Noir universe), Hobgoblin, Scorpion, Doctor Octopus (for the 2099 universe), Electro, Deadpool, and Carnage (for the Ultimate universe), as well as Mysterio (of the Amazing universe), who serves as the main antagonist of the game, with the entire final level revolving around the four Spider-Men fighting him one at a time; the 2099 versions of Hobgoblin and Doctor Octopus, as well as the Noir versions of Hammerhead and the Goblin (as Norman Osborn doesn't actually become the Green Goblin in the Spider-Man Noir comics) are villains created exclusively for this game. As most of these villains aren't known to use acolytes, Shattered Dimensions creates unique types of enemies for each level, mostly under the pretext of the powers that the tablet fragment grants to the well-armed villains: Kraven has a legion of hunters; Hobgoblin uses his fragment of the tablet to create illusions of gargoyle monsters; Electro uses his fragment to create electric minions; Sandman uses his fragment to create sand minions; Scorpion uses his fragment to create smaller offsprings of himself; Deadpool has numerous well-armed fanboys; Juggernaut is being hunted by Wild Pack mercenaries led by Silver Sable, who end up attacking Spider-Man as well due to a bounty placed on his head; Doctor Octopus has numerous unstable genetic experiments; and Carnage uses his fragment to drain the life of numerous S.H.I.E.L.D. agents, who then reanimate as mindless zombies and eventually transform into symbiote monsters themselves.

Each universe's Spider-Man has their own unique type of gameplay and fighting style:

The Amazing Spider-Man levels are mostly combat-based and he uses a combination of melee and web-attacks, mixing up-close and long range combat. He can deal increased damage by using weapons created from webbing or the environment.

The Spider-Man Noir levels are stealth-based, with the player mostly having to stay hidden from the enemies' sight within the shadows and take them out silently, one by one. However, the levels still feature several combat segments, although Spider-Man Noir's attacks are shown to be mostly light and not deal very much damage, which is why it's recommended to remain hidden from enemies during stealth segments, where the enemies are much tougher and deal more damage.

The Spider-Man 2099 levels are also mostly combat-based and he uses acrobatics and his suit's advanced abilities in combat. These levels are unique from the others by having several free-fall segments during which the player must dodge various obstacles, and Spider-Man 2099 has a unique game mechanic called "accelerated vision", which is charged up by defeating enemies and can slow down time around Spider-Man, allowing him to dodge attacks and take down enemies much quicker

The Ultimate Spider-Man levels, where he has been provided with the symbiote black suit that increases his strength to new levels, are the most combat-based in the game, with the player often having to fight large hordes of enemies. The powers granted by the symbiote include symbiotic spikes and tendrils, as well as a unique game mechanic called "rage", which is charged up by defeating enemies and greatly increases the amount of damage that Spider-Man deals, allowing him to quickly defeat numerous enemies at the same time.