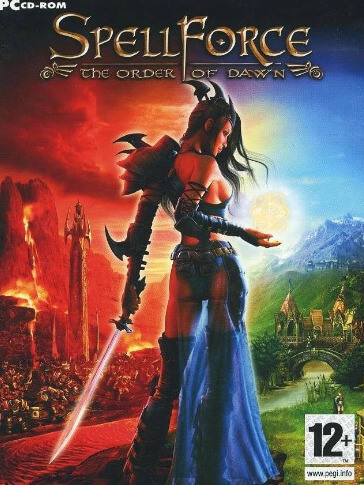 Download SpellForce: The Order of Dawn Free for PC Torrent

SpellForce: The Order of Dawn is a real-time strategy and role-playing video game developed by German game studio Phenomic Game Development and released on November 11, 2003 in Europe and on February 11, 2004 in North America. The game was re-released in 2009 on GamersGate.

The original game was followed by two expansions: SpellForce: The Breath of Winter in 2004 and SpellForce: Shadow of the Phoenix in 2005. The main game and the first expansion were later released as the SpellForce Gold Edition, the SpellForce Platinum Edition includes all three games.

A third expansion titled SpellForce 2: Demons of the Past was announced by Nordic Games in June 2013.

SpellForce is a combination real-time strategy and role-playing video game. The game takes place in a broken world called Eo that was torn apart by a ritual called the Convocation. The ritual was performed by 13 powerful mages that in their greed for power caused the continents of the world to shatter. After the ritual only small pieces of land remain around magical towers created by the god that created the world. The pieces of land are connected by magical portals that make travel between them possible.

The game features campaign mode, free game mode and multiplayer mode. To begin you have to create a character called an Avatar or choose a ready made one that represents you in the game. When creating an avatar you can choose to be a melee fighter, archer or magician and have to distribute 30 stats points among your character stats. Increasing certain skills allows you to use certain weapons and spells. After this is done you can start playing. You start as a level 1 character that has to complete quests and kill hostile game units to gain experience to rise in level. Your character is an immortal warrior called a Runewarrior created by the mages that destroyed the world to fight their wars. If your character dies in battle it will respawn at the last activated bindstone on a map. These stones are found around the maps and can be activated when your avatar is close by. To aid you in your quest you have other Runewarriors at your disposal. These include hero runes and worker runes of six races (humans, dwarves, elves, orcs, trolls and dark elves). To use them you have to control a monument where that type of unit can be trained. There are seven different monuments; a hero monument and one for each race. To gain control of a monument you have to move your avatar close by to activate it. When activating a monument of a race you first need to train workers that can gather resources for you to construct buildings and train fighting units. At the start of the campaign not all runes, units and buildings of each race are available but are gradually unlocked as you progress through the game. When your avatar rises in level you can use rune stones of higher levels that enable you to defeat tougher opponents. In the lengthy campaign you need to complete quests in order to progress. There are two types of quests; main and side quests. The main quests are essential to complete the game; side quests are optional. Quests usually involve defeating enemy encampments, certain key enemy units, finding objects or persons and defending allies.

The Circle was a group composed of the 13 most powerful mages from all corners of the world, drawn together by a shared desire to study and explore all aspects of the magical arts. During their studies they vastly expanded their already considerable powers, and learned to master the Allfire (known as Archfire in SpellForce 2). This act granted the Circle Mages immortality.

In their lust for power, they came across a Text in the land of Xu left by the Fial Darg that spoke about a ritual known as the Convocation.

SpellForce: The Order of Dawn, begins a few years after the Convocation. The Convocation was a ritual that would supposedly grant immense power. At the beginning of the world, Aonir, the Star God, overcame the power of the elements and henceforth held them down, bringing the world into being. But under a certain constellation of planets, Aonir's star is darkened and his will broken. The Circle Mages hoped to take advantage of this by seizing the power of the elements for themselves in order to become almighty. Before long, they were fighting each other for dominance. Vast armies swept across the continent, destroying everything in their path. On the day of the Convocation, they summoned the elements, only to find that their powers were too weak to tame them. Unleashed and uncontained, the elements ravaged Eo, shattering the lands and leaving them scattered and broken. In the end, only small islands remained, clustered around the magical towers that held the power of Aonir, drifting amidst the elemental sea.

The Circle Mages needed vast armies that would be loyal and could be gathered quickly. This is when they had the idea of the Runewarriors. The Runewarriors were fighters and mages whose souls were trapped in stones from which their masters could summon them forth to do their will. Any deaths would be meaningless, as the gift of immortality enabled the Runewarriors to be re-summoned from within the stones at will. With these stones the mages could form immense armies quickly and easily. Sending them forth in unhaltable tides, they would serve their masters for eternity had it not been for the Convocation.

(0) Comments on "SpellForce: The Order of Dawn Full Version"