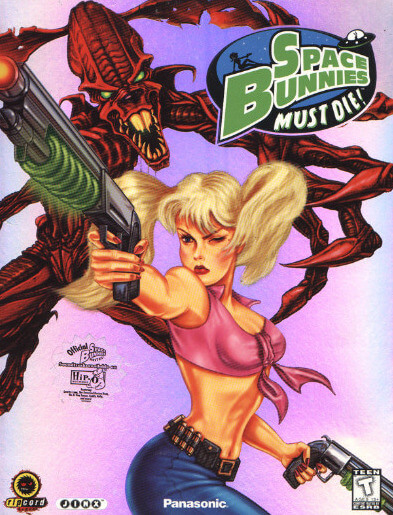 Space Bunnies Must Die! is a third-person action-adventure game developed by Ripcord Games and released on October 27, 1998 by Jinx for Microsoft Windows 98. The player character is truck stop waitress and rodeo performer Allison Huxley, who must save the world and her abducted sister from an invading race of mutant bunnies from space.

Space Bunnies Must Die! was pitched to Fox and Comedy Central as a humorous animated series.

Space Bunnies Must Die! has the run-jump-climb-shoot style of gameplay, similar to the early Tomb Raider series. The game has nine levels, of varying levels of difficulty. On successfully completing those levels, there is a final level.

Panasonic Interactive Media, parent of Ripcord Games, invested heavily in Space Bunnies Must Die!'s advertising and development. However, it became a commercial failure: the NPD Group reported sales of 2,458 copies for 1998. The game was one of several missteps by Panasonic Interactive Media that led to its closure in March 1999, with Ripcord Games sold to an anonymous outside group.

Next Generation reviewed the PC version of the game, rating it three stars out of five, and stated that "If you overlook the ridiculous plot and don't mind fighting your way through the bugs and smirking bunnies, you might actually enjoy yourself."