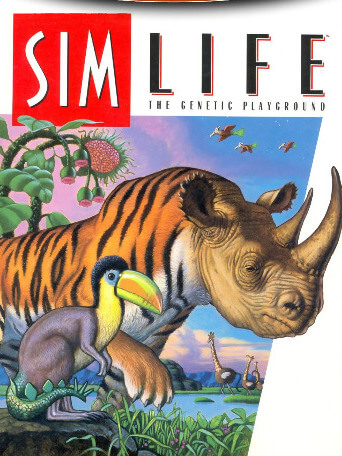 SimLife: The Genetic Playground is a video game produced by Maxis in 1992. The concept of the game is to simulate an ecosystem; players may modify the genetics of the plants and animals that inhabit the virtual world. The point of this game is to experiment and create a self-sustaining ecosystem. SimLife was re-released in 1993 as part of the SimClassics Volume 1 compilation alongside SimCity Classic and SimAnt for PC, Mac and Amiga.

The producers of SimLife refer to it as "The Genetic Playground". The game allows users to explore the interaction of life-forms and environments. Users can manipulate the genetics of both plants and animals to determine whether these new species could survive in the Earth's various environments. Players can also create new worlds with distinctive environments to see how certain species (earth's species or their own) fare within them.

SimLife gives players the power to

Create and modify plants and animals at the genetic level;

Change the physics of the universe in your computer.

Computer Gaming World in 1993 praised SimLife, stating that "By neatly bridging the gap between entertainment and education, SL brings the engrossing science of genetics within reach of any interested person". Games Finder gave Simlife: The Genetic Playground a score of 7 out of 10.

Computer Gaming World in 1994 said that the UnNatural Selection expansion pack "offers a vivid demonstration of several key principles underlying Darwininan evolution ... it would not be surprising if instructors began assigning the game as homework for college-level courses in evolutionary biology". The magazine concluded that it "offers up a slick, funny and memorable game combined with a fascinating artificial life laboratory".

In 1993 SimLife received a Codie award from the Software Publishers Association for Best Simulation.