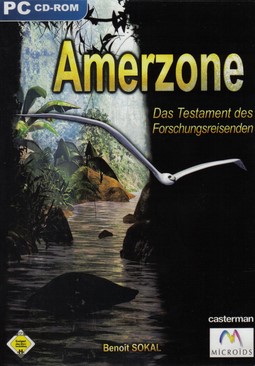 Amerzone (also known as Amerzone: The Explorer's Legacy) is a first-person fantasy graphic adventure game published by Microïds and designed by Benoît Sokal, who based it on his 1986 Inspector Canardo comic strip L'Amerzone. Amerzone was originally released for Windows, the classic Mac OS and PlayStation in 1999, and re-released for iOS and Android in 2014 by Anuman Interactive, whom had bought out Microïds in 2009.

Like the comic, the game tells the story of a French explorer, Alexandre Valembois, who goes on an expedition to the mysterious South American country of Amerzone. There, he discovers many fantastical animals including a species of magical White Birds, who require human intervention for their survival. These become threatened when a friend of Valembois turns Amerzone into a brutal dictatorship, and Valembois endeavors to rescue the endangered species. The game adds a journalist as the player character, who continues Valembois's quest as the man nears death.

Amerzone received generally positive reception. It was praised for its atmosphere and visuals, with critics claiming that it lent it a poetic and dreamlike quality; while criticism targeted the sound, controls, and difficulty. It was a great commercial success, with over 1 million copies sold in its original release.

The world of Amerzone interweaves fact and fiction. "Amerzone" itself is the name of a fictional region in South America and the great river that runs through it. The name, and the lush tropical rainforest in the Amerzone, suggest that it is inspired by the real-life Amazon rainforest. Valembois lives in a lighthouse on the "Langrevin peninsula" in Brittany;note  Brittany is real, but the peninsula is fictitious.

The game veers further into the realm of fantasy once the player enters Amerzone. The country is home to many strange plants and animals, depicted through watercolor sketches in Valembois's exploration journal. The flora comprises mostly herbaceous plants such as the orchid-like Orcochi. Animals in the Amerzone tend to resemble real-life animals, but with bizarre flourishes: the ventousier resembles a shrew, but its snout branches off into sucker-bearing arms; the rhinopotamus is cross between a rhinoceros and hippopotamus; the web-footed giraffe navigates the marshlands with its webbed feet.

The White Birds are the key plot point of the game. The Birds are born legless and as such spend their entire lives gliding over the thermals issuing from a great volcano, sustaining themselves on a diet of flying insects.note  Their wings keep growing after the rest of their bodies has stopped, such that they end up disproportionately long. The Birds' limited range threatens their survival, as does their method of reproduction: every three years, a single, enormous egg is laid, containing many embryos. However, the volcano's fumes will naturally make the eggs "ill", such that they will hatch as Black Birds. Only a nearby indigenous tribe, the Ovo-volahos, knows how to "cure" the eggs to make them hatch as White Birds. Most Amerzonians believe the White Birds to merely be a fanciful myth.