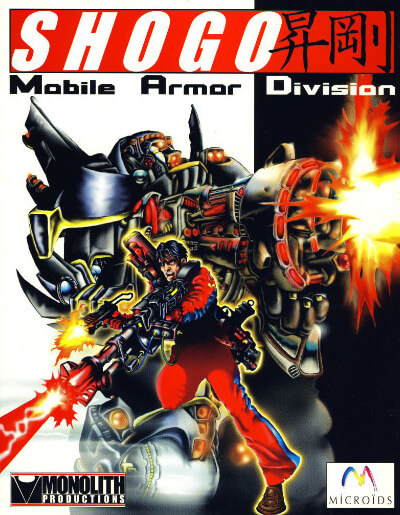 Shogo: Mobile Armor Division (昇剛: モバイルアーマーディビジョン Shōgō: Mobairu āmā dibijon) is a first-person shooter video game released by Monolith Productions in 1998. It was the first game to use Monolith's flagship Lithtech engine. The game allows the player to pilot a large mech, as well as perform missions on foot.

Shogo features a mix of both standard on-foot first person shooter action, and combat with anime-style bipedal mechs. Unlike mech simulator games such as the MechWarrior series, the mechs in Shogo are controlled essentially the same as in first-person shooter games.

An inherent feature of the combat system in Shogo is the possibility of critical hits, whereby attacking an enemy will occasionally bring about a health bonus for the player while the enemy in question loses more health than usual from the weapon used. However, enemy characters are also capable of scoring critical hits on the player.

Players take the role of Sanjuro Makabe, a Mobile Combat Armor (MCA) pilot and a commander in the United Corporate Authority (UCA) army, during a brutal war for the planet Cronus and its precious liquid reactant, kato. Players must locate and assassinate a rebel leader known only as Gabriel. Prior to the game's first level, Sanjuro had lost his brother, Toshiro; his best friend, Baku; and his girlfriend, Kura, during the war. He is now driven by revenge and his romantic relationship with Kathryn, Kura's sister; in Sanjuro's words, "It's kinda complicated."

At two pivotal points in the game, the player also has the opportunity to make a crucial decision, which can alter the game's ending. While the first decision is almost purely a narrative decision, the second decision actually determines who the player will be facing the rest of the game and how the game will end.

Shogo was originally known as Riot: Mobile Armor. It has heavy influences from Japanese animation, particularly Patlabor and Appleseed and the real robot mecha genre.

The expansion pack Shugotenshi would have given more insight into Kura's roles. It would have been six or eight levels of Kura fighting and coming to terms with the death of Hank. Some features of that game would have been various body armor for Kura and new enemies and weapons for her.

Legacy of the Fallen would have moved away from the fighting of Cronus and taken the player to the remote kato mining facility at Iota-33. It would just show how well organized the Fallen actually were and the weapon capabilities of an Ambed (Advanced Mechanical Biological Engineering Division) team. Legacy of the Fallen was to have an entirely new cast of characters, five new mecha to choose from, six new onfoot weapons, five new mecha weapons, several new enemy aliens, and levels that played out more like Half-Life's levels in structure.

Shogo was ported to the Amiga PowerPC platform in 2001 by Hyperion Entertainment. Hyperion also made the Apple Macintosh port and the Linux port of Shogo. The game had not sold as well as had hoped, most notably on Linux, despite becoming a best seller on Tux Games. Hyperion has put some of the blame on its publisher Titan Computer and because Linux users were likely to dual boot with Windows. A version for BeOS was also in development in 1999 by Be Inc.

Monolith shipped 100,000 units of Shogo: Mobile Armor Division to retailers in the game's debut week, following its launch in early November 1998. However, the game underperformed commercially. It sold roughly 20,000 units in the United States during 1998's Christmas shopping season, a figure that Mark Asher of CNET Gamecenter called "disappointing". Combined with the failure of competitors SiN and Blood II: The Chosen, these numbers led him to speculate that the first-person shooter genre's market size was smaller than commonly believed, as the "only FPS game that has done really well over the period is Half-Life." Shogo's low sales resulted in the cancellation of its planned expansion pack.