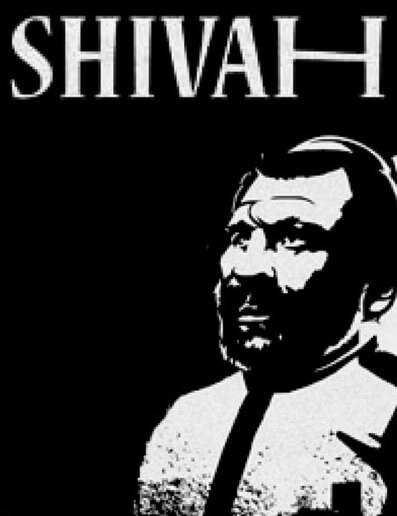 The Shivah is a point-and-click adventure game from 2006, designed and developed by Dave Gilbert with the assistance of others, including voice actors and artists. It is notable in that it features a rabbi as its protagonist and explores themes related to the Jewish faith.

On November 22, 2013, the game was re-released in an updated version titled The Shivah: Kosher Edition, which features new graphics and music, and re-recorded voice-overs.

The game was originally developed for the Monthly Adventure Game Studio 5th anniversary competition in June 2006, which it won. Gilbert went on to form Wadjet Eye Games through which to publish his games, then improved the game substantially, making it longer, with voice acting, DVD-style commentary and extra puzzles. In September 2006 the game went on sale via the Internet from the Wadjet Eye Games site and from Manifesto Games.

The Shivah is a third person point-and-click adventure game. The player uses the mouse to select objects from the character's surroundings to interact with, as well as other characters with whom to speak. When in dialogue with another character, a portrait of them appears in the corner of the screen. Rather than specifically choosing what their character will say next, the player selects from a number of options along the lines of 'calm response' and 'Rabbinical response', the latter of which always involves responding to a question with another question. There are several points at which the player character can be killed, though in such instances the player is quickly returned to the moment before making the fatal choice. The game also features a scene where two Rabbis fight with words, similar to the insult swordfighting of The Secret of Monkey Island. There are many tie-ins to The Blackwell Series, also by Gilbert. Many of the characters and names appeared later in Blackwell games, and in The Kosher Edition the main character of Blackwell series, Rosangela Blackwell, makes a cameo.

Greg Costikyan, creator of Manifesto Games, stated that "the basic theme is the nature of morality." In The Shivah players assume the role of Rabbi Russell Stone, a hard-hearted man who is struggling with his faith. He is visited by the police and informed that a former member of his dilapidated New York City synagogue, Jack Lauder, has been murdered. The police suspect Stone, as Lauder's will explicitly states that Stone is to receive $10,000+. Stone and Lauder had an acrimonious falling out years ago when Stone drove Lauder from his congregation over Lauder's interfaith marriage, and as such is puzzled to learn that Lauder has bequeathed him a large sum of money. To clear his name, Stone sets out to investigate the murder himself. Stone begins by paying a Shivah visit to Lauder's surviving wife, Raj, who points him to their family business. Stone notices that Jack had been paying large amounts of money to a mysterious man named Joe DeMarco whom he suspects may be the killer. Stone overpowers DeMarco in a fight and interrogates him. DeMarco admits to the murder and also points Stone to a large, wealthy synagogue, where he discovers that the corrupt Rabbi who runs it, Zelig, is in league with organised crime. Zelig would find struggling business owners, introduce them to DeMarco, only for them to be extorted before getting murdered. The player can then choose whether or not to kill DeMarco. Zelig kidnaps Raj to bait Stone and tries to kill him. Depending on the player's actions at this point, Stone, Zelig, and Raj each may either live or die. In the best ending, where all three live, Stone, now somewhat less cynical of his faith, returns to his synagouge with his name cleared and pays off his outstanding debts with Jack's money. Zelig is arrested. Raj comes in for a visit as the game ends. If the player chooses to kill Zelig, Stone and Raj (assuming she survives) will never see each other again and the police rule Zelig's death as a suicide. If Zelig lives and Raj dies, Stone remains a prime suspect.

The Shivah has received largely positive reviews. The A.V. Club awarded it a B and stated that "The Shivah fits a compelling moral conscience over a tight decision tree, and compared to sillier interactive fiction like Phoenix Wright: Ace Attorney or Hotel Dusk: Room 215, its rewards are subtler, and more satisfying", while Faithgames stated that it is "not only an excellent indie adventure game, but also one of the best examples of portraying faith through a game that I've ever seen"  Much of the media coverage focused on the unique choice of a Rabbi as the game's protagonist. In 2006, The Shivah won an AGS Award for Best Dialogue writing and Gilbert won the Lifetime Achievement Award. The Shivah came 2nd in Game Tunnel's Sound award for 2006 and 3rd in their Adventure/Quest Game of the Year awards.

(0) Comments on "The Shivah Full Version"