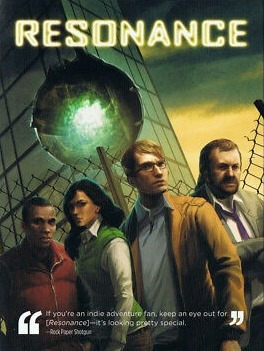 Resonance is a third-person point and click adventure game developed by American studio XII Games and published by Wadjet Eye Games. It was released in 2012 and is available via Steam and DRM free on GOG.com.

Ed (voiced by Edward Bauer) is the assistant to Professor Javier Morales, a brilliant particle physicist. He encounters Anna (Sarah Elmaleh) on a train, and they become friendly. When he arrives at the laboratory, he meets Detective Bennett (Logan Cunningham), who is responding to an emergency call. Some sort of disaster has taken place; the lab has been destroyed, and Professor Morales is dead. Meanwhile, political blogger Ray (Daryl Lathon) is investigating a mysterious organisation known as Antevorta at the behest of a shadowy source, and uncovers a database of the DNA sequences of everyone in the country hidden in a hospital. While taking Morales to the hospital, Ed and Bennett encounter both Ray and Anna, who is a doctor and Morales's niece. Ed reveals that Morales was working on a technology called Resonance, which could be used as a deadly weapon in the wrong hands, and the four of them set out to discover who is responsible for Morales's death and ensure that they do not take hold of his research. That night, Anna is attacked by an intruder in her apartment and flees for her life, escaping her attacker and reuniting with Ed and Bennett.

The four of them discover that Morales had a secret vault somewhere in the city, and surmise that his research must be stored there. Bennet steals the blueprints of the laboratory from the police archives and Ray secures Morales's credit history from a contact of his. The exact details of the vault have been stolen from the security firm who designed it, but they are able to locate it regardless. The four protagonists break into the vault, which is in the tunnels below the laboratory. As they reach the vault, Bennett is held at gunpoint with Ed accusing him of being bribed by Antevorta. When Anna accesses the vault computer, she discovers that Morales was not her uncle, but her father. She has the opportunity to download or delete the Resonance research, but before she acts, Bennett suddenly realizes that Ed had been traveling far out of his way on the metro in order to be on the line Anna rode at the start of the game, and that he is the Antevorta plant. Ed shoots Anna, steals the Resonance devices, and flees.

Upon leaving the vault, Bennett and Ray discover that they have been blamed for both Anna and Morales's murders, and are now wanted men. They are summoned to a meeting with the man who stole the vault plans, who is also Ray's source, and who works for Antevorta. From there they are able to track Ed down to the hospital, where he is attempting to destroy the Antevorta database. He has placed the Resonance devices, taken from the vault, in the basement and on the roof so that the database lies between them. After finding and taking the one in the basement, Ray and Bennett see a television broadcast revealing a series of terrible Resonance attacks is occurring all over the world. They rush to the rooftop to confront Ed, who holds them at gunpoint and sets the timer to fire the Resonance devices in a few minutes. He reveals that he was once the pawn of Antevorta, who compelled him to become close to Anna under false pretenses and aid them in stealing Resonance.

The game's graphics have what IGN called a "retro, low-res pixel art aesthetic". After a series of brief vignettes in which the player controls one character at a time, they are able to switch between any of the four characters at will, using the menu at the top of the screen. They are controlled through a simplified point and click interface, in the style of traditional adventure games from LucasArts and Sierra Entertainment. Many puzzles require multiple characters in order to solve them, such as one in which Ed must crawl into a ventilation shaft while Bennett controls the flow of water through a series of pipes. All four protagonists have areas only they can access or characters who only they can speak to, though most actions can be performed by any of them. All four will offer slightly different descriptions of objects or characters when looking at them.

In addition to a traditional inventory, the player is able to drag objects from the gameworld into a menu which represents the character's memory, which allows them to ask about the object in question when talking to NPCs or one another. The game also consists of several puzzles which the player must solve, including a block-moving puzzle box and a hallucinatory maze.

Resonance features a creator's commentary mode. When this is active, hotspots are inserted into the gameworld which, when clicked, will trigger an audio commentary from either Vince Twelve or Dave and Janet Gilbert, describing various elements of the background and making of the game.

Getting Over It with Bennett Foddy
hit
upd
new