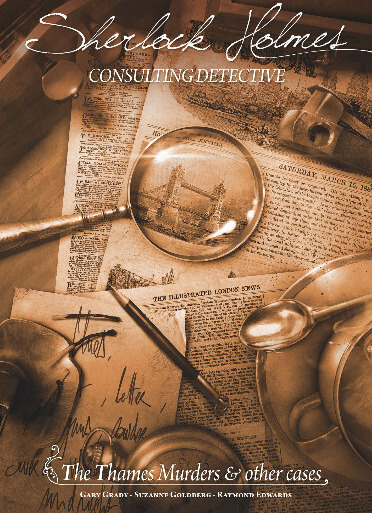 Sherlock Holmes: Consulting Detective is a full motion video game based on a tabletop game-gamebook hybrid which had the same name. It was originally developed by ICOM Simulations for the FM Towns computer and later ported to DOS, Apple Macintosh, Commodore CDTV, TurboGrafx-CD, Sega CD and Tandy Video Information System with all versions being distributed on CD-ROM. The game was re-released as a DVD for use with a standard DVD player and television in 1999. A high resolution and re-mastered version of the game for iPad, Microsoft Windows, and OS X was released on September 18, 2012.

The game uses live actors and sets as the player controls Sherlock Holmes and his longtime partner Dr. Watson, trying to solve three separate crimes by visiting various locations, listening to the dialogue, reading the included mock London newspapers, and, when the player gets enough evidence, answering the judge's questions.

At the beginning of each case a full motion video clip depicts Holmes and Watson meeting a client and learning a few background clues about the case. Then the player must visit a particular location or person, read the London newspapers for clues or ask one of the young Baker Street Irregulars to investigate. The object of each case is to gather enough clues in the shortest time possible, then go before a judge who will then ask the player to answer the important questions about the case. If the player is successful, a full motion video clip will take the player back to Holmes' and Watson's study where they will review the events that transpired, and Dr. Watson will inform the player of his or her score, based on the length of time it took to solve the case.

Holmes and Watson learn about a series of mysterious deaths of three men who were part of an archeology trip to Egypt. Each man was found strangled with a sheath of a mummy's wrapping present at each murder. The London Times believes the deaths were caused by an ancient mummy, creating public hysteria. Holmes and Watson decide to take on the case to find the real culprit but they face a challenge since only one murder was in London while another was in Egypt and another was at sea.

An old general is murdered in his home by a mysterious visitor who quickly vanishes from the scene of the crime. Holmes and Watson investigate to see whether the crime was due to the general's part in a Veteran Tontine, a book he was writing on a missing diamond, a disgruntled marriage, or something hidden deep in his past.

Francis Nolan is found hovering over the body of her lover, Guy Clarendon, in a London hotel with a pistol in her hand. She's convicted of Guy's murder, despite having no memory of ever being there, nor purchasing the gun that was bought in her name. She insists that she's innocent as Holmes and Watson take on the case to see if she is telling the truth. Along the way, Holmes and Watson learn about Guy Clarendon's dark past.

The game was reviewed in 1991 in Dragon #175 by Hartley, Patricia, and Kirk Lesser in "The Role of Computers" column. The reviewers gave the game 5 out of 5 stars. Computer Gaming World favorably described the game's videos' production values as "low-end television production quality ... equal to an average public television production". The magazine recommended the game "with qualifications", calling it "a ground-breaking product with whiz-bang technology that demonstrates the full potential of multimedia", but with "limited play life" due to lack of replayability. In a review for Wizard, Glenn Rubenstein listed the use of live actors and the absence of slow down in the Sega CD version as strong points, but remarked that "The interactivity level is lacking", and that the Sega CD version offered nothing new to those who had played any of the game's previous versions. He gave it a B.

In April 1994 Computer Gaming World said that video quality had improved during the three games of the series, with each offering "solid and professional" acting. The magazine added that "The chief strengths of these games, though, are the challenging cases the player is asked to unravel".