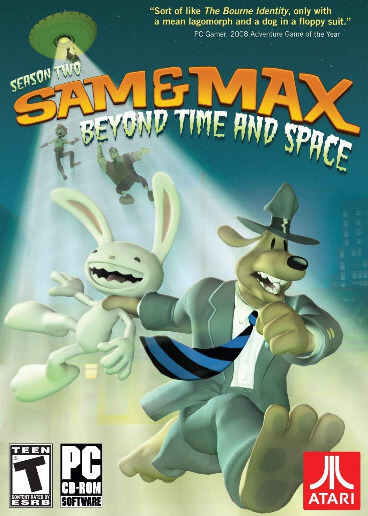 Sam & Max Beyond Time and Space, originally released as Sam & Max: Season Two, is an episodic graphic adventure by Telltale Games based around the characters of the Sam & Max comic series created by Steve Purcell and follows from Sam & Max Save the World.

Season Two builds on Season One with more dynamic NPCs, an updated engine, a hint system, support for widescreen monitors, more realistic animations, and more mini-games within each episode. Season Two features a calibration assistant when first run, which allows the player to set their graphics and difficulty settings before playing.

Unlike Save the World, where GameTap users were able to access each episode two weeks before it was available through Telltale's website, Beyond Time and Space reduced this period down to one day. The first episode, "Ice Station Santa", was released on November 8 on GameTap, followed by a worldwide release on November 9. However, the second episode was delayed until January 11, 2008. New episodes were thereafter released on the second Thursday and Friday of each month.

On December 2, 2008. a press event in London, Atari announced a new partnership with Telltale to bring Sam & Max Beyond Time and Space to retail worldwide in 2009. It will be for both Microsoft Windows and Wii. There will also be fully localized releases in French and German, as well as Italian and Spanish subtitles for the foreign language versions of Beyond Time and Space.

Taking place approximately one year after the events of the previous game, Freelance Police Sam and Max return to their office after a "successful" peace summit, only to discover that their pet goldfish Mr. Spatula has turned evil and prepare to execute him. But before they can do so, Mr. Spatula is suddenly vaporized by a giant robot, who is intent on destroying the duo as well as razing the local city block near their offices. After dealing with the wind-up monstrosity, Sam and Max learn that the Maimtron 9000 was actually a gift from Santa Claus. The two head to the North Pole and find the remaining elves in Santa's workshop cowering, as Santa keeps shooting at them with a machine gun. Sneaking down a chimney into Santa's office, Sam and Max find evidence that an evil spirit is running amok at the North Pole, and work at collecting The Four Horsemen of the Apocalypse action figures to use as part of a ritual to bring the demon (known as the Shambling Corporate Presence) forward so they can capture it and free Santa. However, to their surprise, the demon never had possessed Santa, but rather one of the elves instead, and runs off to distract the Shambling Corporate Presence while Sam and Max work to complete the final part of the ritual: calling forth the three Spirits of Christmas (Past, Present, and Future). Each of the Spirits offers to help, but only if Sam and Max correct a Christmas they had ruined in the respective time periods. After satisfying each of the tasks, the Spirits proceed to help Sam and Max and reduce the demon to a plate of Jell-o, which Santa inadvertently eats afterwards and becomes infused with the evil spirit for real. Sam and Max are able to knock Santa out, and after determining that a typo on a shipping label was responsible for delivering the spirit to Santa instead of Satan, send the possessed Santa on his way to Hell. With dawn approaching, Sam and Max volunteer to deliver all the Christmas presents in Santa's place, but drive away in their car before they can be loaded up, with Max stating that there's no rush because it's the middle of November.

On returning home from the North Pole a month later, Sam and Max find their friend Sybil being chased by a big triangular portal. Asking Bosco about it, he claims that the portal is actually a Bermuda Triangle, taking things into parts unknown. Though Sam and Max are able to stop the triangle in its tracks, soon after Abe, having went out to investigate what happened, is sucked into the portal, leading Sybil to jump in after him, followed by Sam and Max in tow. After jumping through, the duo find themselves on Easter Island, where Sybil and Abe are enjoy a picnic, but are told by the local Moai Heads that a prophecy will destroy them all. It states that a volcano will erupt, covering the island in magma and destroying the Moai Heads, and according to them, the end is coming soon, and they need Sam and Max's help to stop it. Taking the case, Sam and Max find the entrance to a mysterious cave, guarded by a baby Jimmy Hoffa (having drunk too much from the Fountain of Youth and reverted to infancy), whom they need to get rid of somehow. Also around this time, Abe ends up breaking up with Sybil after his continuous ogling of the Wind Moai. Sam and Max eventually trick Baby Jimmy Hoffa into consuming more of the Fountain Water, erasing himself from existence. Having finally gained entrance to the cave, they discover a group of aquatic Ocean Chimps who worship the Moai Heads' giant stone feet. They also find out that the ghost of Mr. Spatula is behind it all, having established himself as High Priest of the group and planning to use a mechanism that controls the volcano to set off an eruption. After some puzzle solving, Sam convinces the Ocean Chimps that Max is the true High Priest, but once they succeeded, Mr. Spatula had already set off an eruption which they're too late to stop. However, the two manage to save the island by using a giant Bermuda Triangle, diverting the lava to some place else, but also unfortunately sucking up the Bermuda Triangle back to home, leaving them to have to swim back to New York with Abe in tow, while the Moai heads are left to live on for another thousand years. After the credits, the Moai Heads are seen being lifted out of the ground and into the sky by a bright light.

Sometime later, Sam & Max are caught in an elaborate death-trap by a goth vampire named Jurgen, with Max wondering how they got to this point. A flashback starts off the first part of the episode: Having returned home after their adventures on Easter Island, Sam and Max are in the middle of dealing with a zombie attack when the Commissioner calls about a zombie attacks throughout the city. By talking to the C.O.P.S. they find out that the zombies are coming from The Zombie Factory, a nightclub in Stuttgart, Germany. The club turns out to be located in an old castle and run by the vampire Jurgen. Jurgen is far too powerful to confront directly, but by using various vampire weaknesses (holy water, uv light and garlic clove cigarettes) Sam and Max manage to destroy the source of his power: his popularity. They pursue him to his back room, where they have the most impressive fight of their career. Since Max remembers that part, the flashback ends and the story is back at the scene in the introduction, with them stuck in the trap after losing the fight. Unfortunately, they've now spent so much time reminiscing that it's too late to escape and the trap snaps shut, killing the Freelance Police. The pair wake up later in the graveyard transformed into zombies and find that they can now understand other zombies but their mortal friends cannot understand them. They return to the back room but find Jurgen sleeping in his coffin and their souls trapped waiting to be shipped off to hell. To make things worse, their souls don't even want to reunite with them. The Soul Mater Sybil got on the Internet is just what they need to get their reluctant souls back in their bodies, but she needs it herself to find a date after having broken up with Abe in Moai Better Blues. Sam and Max eventually manage to turn Jurgen's Monster into the perfect date for Sybil, inadvertently convincing her to get back together with Abe afterwards, and grab the Soul Mater. When they get back to their souls, though, a malfunction makes them end up the each other's bodies.

(0) Comments on "Sam & Max Beyond Time and Space Full Version"