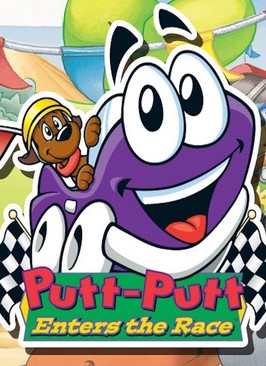 The game was created by Humongous Games as part of the popular edutainment series Putt-Putt in 1998. The game was re-released in 2014 for iOS, Android, and Steam.

Putt-Putt and Pep receive a letter from Redline Rick inviting him to enter the Cartown 500, and he's been waiting for this type of event all year, so he's definitely going to accept it. But he needs some things before he enters, so he needs to drive around Cartown and look for them. Putt-Putt has to find the number of important objects before he qualifies for the race (High-powered, high octane gasoline, super speedy radial racing tires, a safety helmet for Pep, and a triangular flag with a specific number on it as his official number). When all of the objectives are completed, Putt-Putt is allowed to enter the race. At the end of the race, Redline Rick announces Putt-Putt as the winner with the medal and trophy. However, Redline Rick rewards Putt-Putt a ribbon if Putt-Putt does not win first place in the race.

The game was officially unveiled at the 1998 Electronic Entertainment Expo in Atlanta, May 28–30, at booth 5626. Humongous Entertainment executive vice president of marketing and licensing, Ralph Giuffre, said "We're very excited that for the first time ever, kids will actually sit in Putt-Putt's driver's seat and take a spin around the Cartown Speedway with their favorite purple car." On January 14, the Humongous Entertainment website (humongous.com) launch a week-long online celebration for the game, which included offering players free downloadable demos, online games, contests and other items the at Putt-Putt's Pit Stop. In December 1999, Humongous partnered with the Make-A-Wish Foundation for a holiday promotion where customers could " donate the full $10 to the Make-A-Wish Foundation or donate $2 to the charity and receive $8 back" at participating national software retail outlets for Humongous's best-selling 16 software, which included this game.