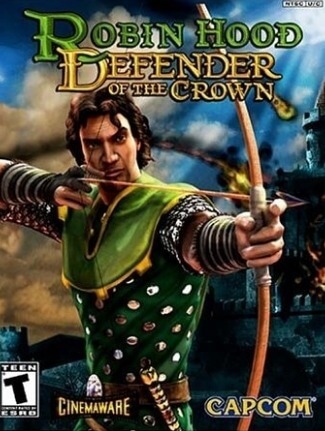 It is a time of great unrest in England. With King Richard the Lionheart held for ransom, the evil Prince John seizes the throne, and declares himself the King of England. The entire nation soon falls into civil war as greedy nobles war amongst themselves and Prince John sends forth armies to shackle the country under his unjust rule.

In this time of lawlessness, only an outlaw can lead the people to freedom. One man, the embodiment of true honor, vows to save his people and restore peace to the land. This man is known as Robin Hood. From the small-scale skirmishes with the Sheriff of Nottingham in Sherwood Forest, Robin finds himself drawn into the larger battlefields of England, and the hero of the poor must become the savior of an entire nation.

Robin Hood is a blend of role-playing and turn-based strategy combined with action sequences.

As Robin Hood, the player must:

Fund the war effort by lightening the purses of traveling merchants in archery ambushes.

Joust in tournaments for fame, fortune and land.

Sword fight through battlements, catacombs and towers in search of treasure - or to rescue a damsel-in-distress.

A story of action, drama, romance and adventure.

Twenty minutes of rendered cutscenes and a full hour of recorded voice acting.

8 different alternate game endings depending on the player's actions through the game.

The game garnered mixed reception, receiving middling to good reviews. IGN gave it a 7.1 (Good) rating, stating "With all the elements that come into play, Defender of the Crown is overly enjoyable — especially for fans of strategy titles".

In contrast, JeuxVideo.com (French) gave it 11 out of 20, stating "too much wanting to diversify, you lose a little all the charm and richness of different styles... we are not in the presence of a graphically stunning title". ActionTrip, while praising the graphics and quality of the dialog gave it a 5.5 (okay) review stating "it fails to sufficiently advance the original's simplistic gameplay. The end result is a very short and naive game". Gamespot.com gave the game a 6.0 (fair) rating, and only recommended it for "die hard fans of the original".

(0) Comments on "Robin Hood: Defender of the Crown Full Version"