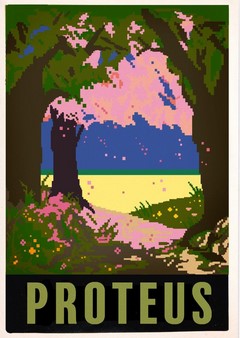 Proteus is a 2013 exploration and walking simulator video game designed and created by Ed Key and David Kanaga for Microsoft Windows, OS X, Linux, PlayStation 3 and PlayStation Vita. In the game, the player traverses a procedurally generated environment without prescribed goals. The world's flora and fauna emit unique musical signatures, combinations of which cause dynamic shifts in audio based on the player's surroundings.

The game began development in 2008. Key first conceived Proteus as an open-ended role-playing game akin to The Elder Scrolls IV: Oblivion but, because of the work required for such a project, later redesigned it to be "nontraditional and nonviolent". Audio designer and composer David Kanaga joined the project in 2010. Versions for the PlayStation 3 video game console and Vita handheld console were developed by Curve Studios, whose team added new gameplay features to the Vita edition at Sony's request.

Proteus won the prize for Best Audio at the 2011 IndieCade awards, and was a finalist for the 2012 Independent Games Festival's Nuovo Award. Following its release, critics praised the game, especially for its audio features, although some criticised the game's brevity and limited replayability. The game was involved in numerous discussions of video games as art, with some debating whether it could be considered a video game at all.

In Proteus, the player explores an island from a first-person perspective. The island is drawn in a pixel art style and consists of hills, trees, structures, and animals such as frogs and rabbits; the layout of these elements is different each time the game is played. The focus of the game is on exploration rather than interaction, as there is no narrative and the player is given no instructions on how to proceed. Possible interactions are limited—for example, animals may run away when the player comes too close. The game's soundtrack varies depending on the player's movements and location; it may fall silent when the player is at the top of a hill and become sonically dense as they travel down it. The soundtrack layers additional sounds and notes when the player nears objects and animals in the world. Many objects on the island are rendered as two dimensional sprites, contrasting with the three-dimensional landscape.

When the game begins, the player is situated away from the island and must move across an ocean to reach it. Upon arrival, players are free to explore the whole island during the initial season of spring. During nighttime, the player can enter a designated area to advance time to the next season, exploring each until the end of winter, after which the game ends. The landscape changes with the season—for example, trees shed their leaves in autumn. The player can capture a screenshot via a "save a postcard" feature, through which they can save and load their progress.

In addition to the base gameplay elements, the PlayStation Vita version allows the player to directly affect the environment with the console's rear touch panel and to generate islands based on the current date and location in the real world.