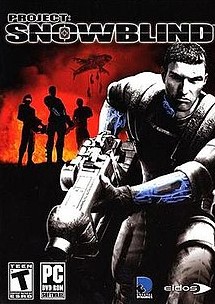 Project: Snowblind is a first-person shooter video game developed by Crystal Dynamics and published by Eidos Interactive in 2005 for PlayStation 2, Xbox and Microsoft Windows. The game follows soldier Nathan Frost, who is enhanced with nanotechnology following injuries on a mission and sent against a military regime known as the Republic. Players control Frost through a series of linear levels, using enhancements both in combat and to manipulate security devices hazards such as cameras. The online multiplayer allows up to sixteen players to take part in modes ranging from team-based to solo battles.

Beginning development in 2004, the game was Crystal Dynamic's first attempt at a first-person shooter and originally planned as part of the Deus Ex series with consultation from original developer Ion Storm. The game eventually evolved into its own product, but retained gameplay elements from its Deus Ex roots. Reception of the game was generally positive.

Similar to the Deus Ex series, the focus of Project: Snowblind's gameplay is giving the player a variety of choices on how to approach any given situation. Although the game is generally linear, most levels feature multiple paths through any given area, allowing players to either rush in guns blazing or attempt to find a more stealthy side-path. Unlike Deus Ex, the game is entirely centered around pure combat, but nonetheless provides the player with multiple options regarding every battle. Every weapon in the game has a secondary fire mode, several of which create exotic effects such as a swarm of drones that will actively seek out and attack enemies. The player can also throw a variety of grenades with different effects, including a riot shield that creates a temporary stationary energy wall for the player to take cover behind. The player can also use a special "Icepick" device to hack enemy cameras, turrets, and robots and use them against enemy forces. The game also features several driveable vehicles. Finally, the player's character possesses a variety of nano-technology augmentations that can be used to grant them various powers.

In an attempt to stop Project: Snowblind, Frost spearheads a controversial assault on Yan Lo's underground bunker with Liaw's inside knowledge, fighting past Yan Lo's elite augmented guard. He eventually faces Yan Lo, discovering that he is an augmented soldier like Frost. Created twenty years ago using an earlier generation of mechanical augmentation, Yan Lo was driven insane by the technology's painful side effects, fuelling his hatred of technology. Frost manages to fatally injure Yan Lo, but he declares that Project Snowblind will continue before blowing himself up.

In a final attempt to stop Project: Snowblind, Frost launches a final assault on the facility where the EMP bombs are being prepared for distribution, aided by the surviving Coalition soldiers. While his forces hold off the remainder of the Republic forces, Frost enters the facility and destroys the EMP bombs, disconnecting his own augmentations so he can survive the resultant EMP shockwave. The final scene shows Frost and the survivors, including Liaw, walking to the nearest functional Coalition base fifty miles away.