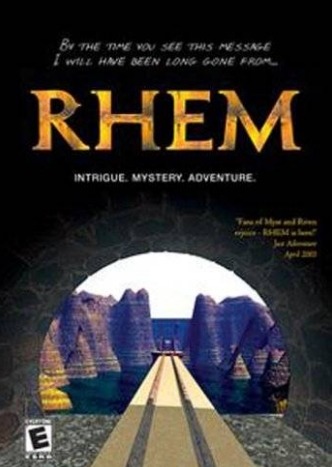 RHEM is an adventure game from Knut Müller and Got Game Entertainment. It is distributed as a Macromedia Director file. The player explores a barren, maze-like landscape of water ponds, walkways, and brick buildings with the aid of a partial map. The game has several puzzles involving machines and symbols. There are three sequels, called RHEM 2: The Cave, RHEM 3: The Secret Library and RHEM 4: The Golden Fragments.

RHEM, like Myst, is made up of a series of static images.

The object of the game is to locate four pieces of a letter, which must be pieced together.

Each of the quarters of the letter is located in a different area not shown on the map provided in the game's package.

According to Müller, the following development tools are used to develop RHEM

RHEM received "mixed" reviews according to the review aggregation website Metacritic. Robert Gerbino of GameZone praised its similarity to Myst in terms of its puzzles but criticized the graphics and repetitive gameplay.