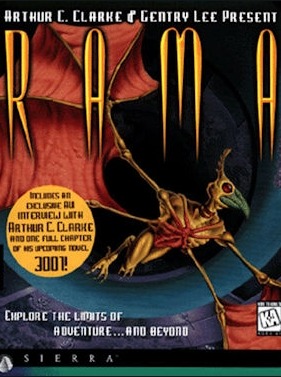 Rama is a first-person adventure game developed and published by Sierra On-Line in 1996. The game is based on Arthur C. Clarke's books Rendezvous with Rama and Rama II and supports both MS-DOS and Windows. In 1998, a PlayStation version was released in Japan.

It is the second Rama game to be produced. Rendezvous with Rama, a text adventure, was released in 1984 by Telarium.

Much of the gameplay is done with the "wristcomp", a device that is used for communication with other characters and mapping or transport to other locations. The player also has in possession a small android based on Puck which will comment and give descriptions of the surrounding objects or events (therefore used as an interface element for examining objects).

Four years ago, a gigantic cylindrical object entered the solar system. The International Space Agency (ISA) named it Rama and sent an expedition named "Newton Team" to investigate. They soon discovered that Rama is a hollow, rotating cylinder with enormous cities, populated by other alien species that have been collected during its travels: Myrmicats (seen in images but never encountered in the game), Avians, Octospiders. The "native" beings of Rama are the Biots (biological robots) constructed by the aliens who built Rama, and are a part of it.

As in many Myst-like adventure games, the player is an anonymous, silent protagonist—an astronaut who is assigned to replace the late Valeriy Borzov who died during the mission under mysterious conditions, as the introduction explains.

The player at first must investigate the area known as "the Plains" and find items that will help solve the logical/mathematical puzzles. Two Raman cities, nicknamed "London" and "Bangkok" by the expedition crew, will be visited in order to learn more about the species that accompany the astronauts. To proceed, the player must solve "complete with the shape which is logically missing" puzzles as well as mathematic exercises in the octal and hexadecimal number systems.

After the Plains have been explored (actually when the player has managed to reach and obtain all the useful inventory items), Rama changes towards an impact course with Earth and a special team inside the expedition (originally consisting of Heilmann, Borzov and O'Toole) proceeds to the "Project Trinity" and arms a bomb network to destroy Rama and its inhabitants. The player then proceeds to the "New York" island within the Cylindrical Sea which houses one of the bombs. While there, the player learns that Rama's course has diverted away from Earth and is no longer a risk, but the bombs have already been armed to explode in six hours. Unfortunately, O'Toole, who knows the code to disarm it, is lost, and during the six in-game hours, the player has to interpret the code and find the bomb in order to disarm it.

The epilogue implies a sequel, which was already scheduled for production, but was never completed.

The game supports MS-DOS, Windows, and Macintosh platforms and was created using version three of the SCI game engine. As was usual in that time, the graphics are combination of 3D rendered scenery and live-action actors in 256 colours.

The game comes on two CD-ROMs, with a third reserved for videos. The first part of the videos show the prologue, concerning the reaction on Earth when Rama was discovered in a form of a journalist show, and hosts interviews of the characters that will be seen later in the game. The other features a brief interview with Arthur C. Clarke and Gentry Lee.

Clarke himself appears in some scenes of the game, such as when the player dies, and in the epilogue, gives advice to the player. He is implemented into the scenery and humorously interacts with it, provoking a Biot into a fight in one example.