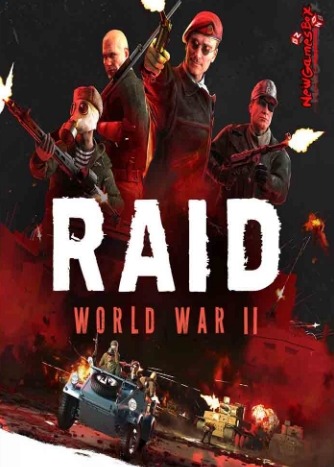 Raid: World War II is a four player co-op first-person shooter video game that lets players team up as the Raid crew and venture through events of World War II. The game was developed by Lion Game Lion and was published by Starbreeze Studios for Microsoft Windows.

During World War II, the Nazis are on the verge of winning the war in Europe, bullets do little as the Nazis seem unstoppable. In the meantime, four prisoners of war – Sterling, Rivet, Kurgan and Wolfgang have been freed by “Mrs. White,” a secret British Intelligence Operative, who needs someone to take down Hitler and his Third Reich once and for all. Their objective is to fight the war - without rules or mercy. Their reward is all the Nazi gold they can carry. These specialists are brought together with a purpose, rebel against the Nazi oppression and sabotage the Nazis' chances of victory by sabotaging, assassinate, steal, and pulverise anything bearing the Swastika.

Raid: World War II is developed by Lion Game Lion, a Croatian Starbreeze partner studio, that has developed downloadable content for Payday 2. The team chose to work with Diesel, an engine made by Overkill Software (ex-Grin Studios), because they have an extensive experience on working with the engine. The game has a budget of US$8 million, financed by Starbreeze Studios.

Raid: World War II received mixed to negative reviews. According to Metacritic, it currently holds an aggregate score of 53% on PC, 46% on Playstation 4 and XBOX One. IGN gave the game a score of 5.0. PlayStation Lifestyle given a score of 5.5/10. Push Square rate 2/10. TheSixthAxis rated the game, 3 out of 10. Game informer given a score of 4 out of 10.