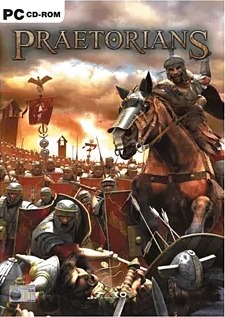 Praetorians is a 3D real-time tactics game developed by Pyro Studios and published by Eidos Interactive, based on Julius Caesar's campaigns in Gaul, Britain, Crassus' battles in Parthia and the events of Caesar's Civil War the player controls either the Roman Republic, the Ptolemaic Kingdom (Inaccurately represented as the New Kingdom of Egypt) or a generic Barbarian tribe based on the Helvetii, Gauls and Celts.

Unlike most Real Time Strategy titles, Praetorians focuses on Military and tactics, rather than building, or resource management. Units are trained from a garrison, which is build on a town or village which requires a garrison to be built, and a commander to be sent there.

There is also the presence of multiple types of terrain in the game. Forests can be used to hide infantry units, and to spring ambushes against troops out in the open. Watery terrain which prevents heavy infantry units from crossing. Grassy terrain which can be lit on fire, and can kill troops that cross the fire.

Members of an alliance may not attack one another, though it is still possible to attack an allied building or village belonging to an ally. In times of crisis team members can call upon each other via the message line: "We need help." Allies will normally offer spare troops in assistance. 'Praetorians' differs from other games of its genre in that resources do not play a part in it. In most real time strategy games, items such as wood, food, gold, stone and glory must be collected, to be spent during the creation of troops. The only resource you need to recruit stronger soldiers are honour points. Honour points are earned by fighting and killing enemy troops. There are also troop control points and unit control points; The former will limit the number of troops a player may have in their army, and the latter limits the number of individual soldiers and army men that can be used.