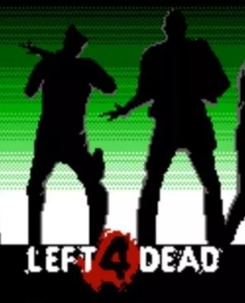 Like its basis game, Pixel Force: Left 4 Dead allows players to play as one or two of the four survivors: Bill, a Vietnam veteran; Francis, a biker; Louis, an office worker; and Zoey, an aspiring film director. It is an overhead shooter, and is described as a combination of Ikari Warriors and Fester's Quest by Destructoid. It is the first of the Pixel Remix series; since its release, Ruth has developed Pixel Force: Halo and Pixel Force: DJ Hero. It was met with mixed reception to the trailer; while some found the designs of the characters to be cute, others thought that the low number of zombies shown in the trailer was not in keeping with Left 4 Dead.

Pixel Force: Left 4 Dead takes some cues from its inspiration, Left 4 Dead, incorporating weapons such as pistols, machine guns, and shotguns, zombies, and the four main characters: Bill, Francis, Louis, and Zoey. While Left 4 Dead is a first-person shooter, this game is an overhead shooter. Similarly, while Left 4 Dead allows four-player co-op, this game only offers two. While at the title screen, players can also choose whether to play on Normal or Advanced mode. The game has a total of four stages: No Mercy, Death Toll, Dead Air, and Blood Harvest, each with five parts to them. The objective of each stage is to survive the zombie attack for each part until they reach an escape route at the end. In single player, if the player's character's health is depleted, they will die, and the game will restart at the checkpoint. In multi-player, if one character collapses, the other character can help them up before they die. If they die before then, they cannot appear again until the next checkpoint. Zombies do not attack players' characters unless they are close usually, though special infected attack from a distance, such as the Boomer, which shoots projectile vomit at players. Players can hold two weapons at a time: the pistol, their default weapon, and either the shotgun or machine gun, which can be found throughout the game.

Pixel Force: Left 4 Dead is a fan-made version of Left 4 Dead by independent video game designer Eric Ruth. It was his first attempt at creating an 8-bit styled remake of a previously existing title. The idea of making an 8-bit remake of Left 4 Dead originally took form when he suggested to his friend "wouldn't it be cool if I re-made Left 4 Dead..but like, as an NES style game?", which his friend with a straightforward "Hell yeah!" While developing another game called Mean Kathleen, he began working on sprites for the four survivors and special infected from Left 4 Dead for fun. They turned out well enough, so he decided to expand the sprites more. He noted the composition of the music as the most difficult part of the game's development, due to how Valve's Left 4 Dead was designed to have music that is difficult to remake with only four channels of sound. In the end, he was able to accomplish this. Due to the limitations that go along with an 8-bit game, the Survivor and Versus modes from the original Left 4 Dead were cut, along with some of the weapons. It was released on January 4, 2010. Pixel Force: Left 4 Dead started a series of fan-made retro game remakes of newer games under the Pixel Force label; since its release, Ruth has released two more games: Pixel Force: DJ Hero and Pixel Force: Halo.

Before its release, Pixel Force: Left 4 Dead received mixed reception. In response to the first trailer, Kotaku's Owen Good commented that the infected were too docile, and that it seemed easier than typically difficult NES games. GameSpy's Tyler Barber said that it "may be the cutest thing you'll see all day", though wondering if it would not have better complimented Left 4 Dead by making it a more fast-paced action game like Robotron 2084; however, he declares that he will download it day one. Retronauts' Bob Mackey called it an "impressive piece of work from a very devoted fan." While he noted that the first video shown was somewhat disappointing, the more recent video at the time showed it to be an ambitious project. Rock Paper Shotgun's Alec Meer described it as a "lovely game". 1UP.com's Chris Pereira called it an "impressive project" and "not too shabby" because it was made by only one person.

After release, however, the game was considerably more well received. While Valve has yet to comment to creator Eric Ruth on the game, they have described it as "hilarious." Destructoid's Jonathan Holmes called it "pretty fun", describing it as a combination of Left 4 Dead, Fester's Quest, and Ikari Warriors. Fellow Destructoid editor Jordan Devore called it a "cool little project", though he wished that the zombies moved faster. The Escapist's John Funk noted it as a good choice for fans of zombie games and retro games. Eurogamer's Tom Bramwell comments that it is worth it for the "cutesy takes on Bill, Zoey, Francis and Louis if nothing else." GamePro's Dave Rudden, while not having played it, hoped that it would inspire more games like it.