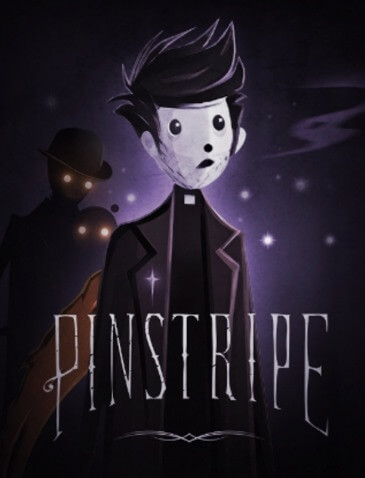 Pinstripe is a puzzle, adventure video game for Microsoft Windows, macOS, Linux, and Nintendo Switch. The game was developed by Atmos Games, the studio of Thomas Brush, who created and designed it over a five-year period. It was published by Armor Games.

Pinstripe follows Teddy, a disgraced ex-minister, who is on a train with his three-year-old daughter, Bo. Ted encounters Pinstripe, a shadowy figure who is also on the train. After Bo is kidnapped by Pinstripe, and the train crashes into a town, Ted goes off to find Bo.

Exploring the town, Ted finds his dog, George, who gives him advice throughout the game, and Bo's slingshot, which acts as a weapon. Throughout the town, the residents are drunk off of Sack Juice, which Pinstripe produces.

Near the end of the game, clues collected by Ted imply that after his wife died, Ted began to drink, and soon after crashed his car, killing him and Bo, and also finds that Pinstripe is the name of the whisky he drank. Owning up to his mistakes, he faces off against Pinstripe, who wants to adopt Bo to take her away from Ted. After defeating Pinstripe, Ted enters a dark room, and George sacrifices himself to let Ted pass. The ending sees that Ted is reunited with Bo in a sunny field. Dialogue options earlier in the game decide if George is reunited with Ted and Bo. They come across a woman on a bench, presumed to be Bo's mother. The game then ends.

Brush had been working on the game for four years, and it was originally slated for release on Steam and iOS in 2016. On February 16, 2016, a Kickstarter was launched to help finish with the game's development and so Brush could quit his job as a freelancer, with a goal of $28,000. The project had reached its funding goal within two days raising $42,494. The project ended on March 17, 2016, having raised $106,729, funding stretch goals that include a bonus level, voice acting and an extra mode. Thomas Brush created every aspect of the game himself, including the original score, artwork, programming, and writing, though several people did lend their voices to the game for various characters. The game finally released on April 25, 2017, and was localized into seven different languages.

In his development postmortem for the game at Gamasutra, Brush credits Unity as being easy to learn and supported by plugins which were invaluable to his development. He warned others against using UnityScript, due to its excessive compilation time, and instead to use C#.

In 2016, Pinstripe was a finalist at the third SXSW Gaming Awards under the category 'Gamer's Voice Award (single player)'. Upon its release, the reviews were mixed. Jeremy Winslow, writing at GameSpot awarded the game 5/10, criticising the narrative as pedestrian, and "failing to inspire emotional attachment in its characters". For Winslow, this, and flaws in its puzzle design, combat and platforming overpowered the game's rich atmosphere. At Time, Matt Peckham was much more positive, awarding the game 5/5. Peckham described the game's depiction of hell as "a melange of beauty and horror" and compared it to the works of Bosch, Bruegel and Dante. He concluded the review, by reflecting on the themes raised by the game, "What does loss resemble? How does it sound? What if the museums to mistakes that we spend lifetimes assembling in our minds were a physical space?"