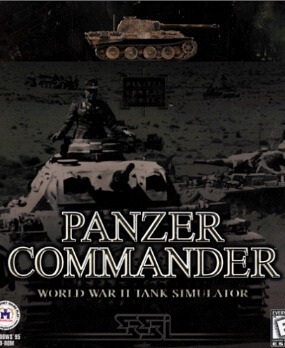 Panzer Commander is a computer tank-driving simulator released in 1998. Developed by Ultimation Inc. and published by Strategic Simulations Inc.. The game is set in World War II as a tank simulator.

In the game the player takes command of an armored fighting vehicles (AFV). There are over 20 driveable tanks from Germany, Russia, the United States, and Britain and 28 support vehicles.

There are ten scenarios for each nationality and six campaigns - three German and three Russian. The game also offers Direct3D acceleration, a powerful scenario editor, and excellent multiplayer support for up to six players over LAN or the Internet.

The gameplay revolves around scripted scenarios with time limits. Infantry is represented by static emplacements and fortifications and artillery and air support are not under your control.

Next Generation reviewed the PC version of the game, rating it four stars out of five, and stated that "It's good-looking and historically accurate, and it controls well. What more could any tank fan ask for?"