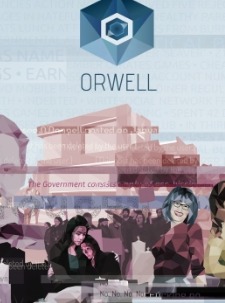 Orwell is a series of episodic simulation video games by German indie developer Osmotic Studios in which the player assumes the role of a state operative and monitors surveillance sources to find national security threats.

It is named after George Orwell, the author of the dystopian novel Nineteen Eighty-Four, references to which can be found throughout the game. The first game in the series, subtitled 'Keeping an Eye on You', was released as a five part episodic series on October 20, 2016. A three part sequel subtitled 'Ignorance is strength' was released February 22

Orwell takes place in a country called the Nation, led by a modern-day authoritarian government known as The Party in the capital of Bonton. In 2012, the Party passed the Safety Bill, a law expanding the government's ability to spy on its citizens in the name of national security. As part of the bill the Ministry of Security, led by Secretary of Security Catherine Delacroix, commissioned a covert surveillance system codenamed Orwell.

The player takes the role of an Orwell investigator, who has just been selected to use the system.

The first season was reviewed and generally well-received by multiple gaming news outlets.