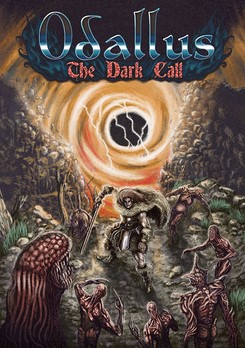 Odallus: The Dark Call is a 2015 action-adventure platform game in the vein of Castlevania III: Dracula's Curse, developed by Brazilian indie studio Joymasher. The game was released originally for the PC, but later for the PS4 and the Nintendo Switch consoles.

Odallus was developed by JoyMasher, a Brazilian developer who had previously released Oniken. The game was part-funded through an Indiegogo crowdfunding campaign, raising $7,533 towards its development costs in August 2013. The game was released in July 2015, and in November 2015, was updated to include a more difficult "Veteran Mode" which included new enemy types.

An army of demons burn Haggis's village and take his son; Haggis goes into action to defeat them. It appears that a mysterious cult has kidnapped his son for plans of a dark sacrifice.

Odallus is an action-adventure platform game, which is highly reminiscent of early NES platform games, most notably of the Castlevania franchise and Metroid. The player controls Haggis, who can run, jump, and use his weapon, initially a weak sword. With the game having several role-playing elements, Haggis can upgrade his equipment and abilities by finding items hidden throughout the various levels. He can then revisit previous levels to overcome obstacles and find additional secrets. Each level contains a boss that becomes easier to reach when the player uncovers secret shortcuts. Haggis can also acquire subweapons such as axes, torches, etc., which have a limited number of uses, indicated in the game's HUD.

Odallus received positive reviews, currently sitting at 80/100 on Metacritic. Destructoid gave the game 9/10, saying, "Odallus: The Dark Call is a worthy addition to any metroidvania fan's library and is worth the asking price.". USGamer also recommended the game. Worthplaying scored Odallus 9/10 and concluded, "Fans who adore adventure games of the classic console era should definitely grab Odallus." The game received an 8/10 from CGMagazine, who called it "frustrating at times, thanks to the level of difficulty", but nevertheless recommended the game. M! Games gave the switch version a score of 74 out of 100, calling it a fine homage to games such as Legendary Axe, and Castlevania.

Italian magazine The Games Machine gave it a 4/5 score.