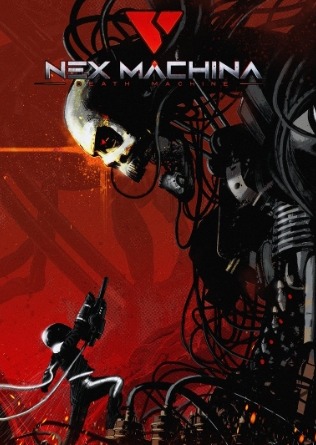 Nex Machina is a shoot 'em up video game developed and published by Housemarque. The game was released in June 2017 for the PlayStation 4 video game console and Windows-based personal computers. Tentatively known as The Jarvis Project during development, veteran arcade game designer Eugene Jarvis served as a creative consultant on the project.

Nex Machina is a twin-stick shoot 'em up video game played from a top-down perspective. Players move through rooms shooting waves of enemies while attempting to save humans. Power-ups and weapon upgrades are dispersed throughout levels.

Nex Machina was developed by Finnish video game studio Housemarque with designer Eugene Jarvis serving as a creative consultant. Jarvis is known for his role in designing arcade shoot 'em ups such as Defender (1981), Robotron: 2084 (1982), and Smash TV (1990). At the 2014 D.I.C.E. Awards, Housemarque's founders Ilari Kuittinen and Harri Tikkanen met with Jarvis and asked him if he would be interested in collaborating on a game. Jarvis' games, particularly Defender, was a source of inspiration for Housemarque's 2013 game Resogun. For the design of Nex Machina, they combined elements from Jarvis' previous shoot 'em ups and Resogun. The development team experimented with different setups for the game's firing mechanics. They followed a different design philosophy than their 2016 game Alienation by choosing not to incorporate character progression systems in Nex Machina.

Nex Machina is powered by a significantly enhanced version of the game engine and voxel technology that was used for Resogun. The inclusion of a volumetric rendering technique known as Signed Distance Fields allows for a smooth transition between complex 3D meshes and voxel particles to give them more flexibility in how objects appear on the screen. The studio dubbed their art style for the game as cablepunk—a darker take on cyberpunk.

Eurogamer ranked the game eighth on their list of the "Top 50 Games of 2017".