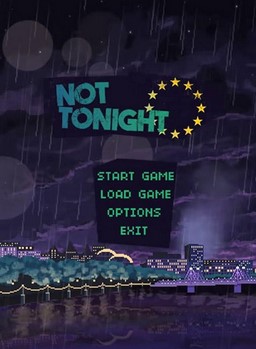 Not Tonight is a role-playing adventure game by British studio PanicBarn, released for Microsoft Windows in August 2018. Set in an alternate timeline shortly after the United Kingdom's vote to leave the European Union, the player takes the role of a European-born immigrant who must survive under a far-right British government, working as a bouncer across various venues and earning enough to avoid deportation. Along the way, the player must make decisions on whether to change the course of events or remain complicit with the new administration.

The gameplay of Not Tonight is based on the responsibilities of a bouncer, working for Albion (England) as a citizen of European heritage. As a bouncer, the player must analyse various parts of the guests license checking whether they are under age, provided fraudulent information or have an incorrectly matching photograph, and determine whether to allow entry to an establishment. As the game progresses, the player must undertake additional measures as requested by larger venues or by the state. This includes: stopping various nationalities from entering, those who wear certain clothing, individuals who are not on the guest list, people without tickets and various other rules as gameplay becomes more challenging. Additionally, the player can also accept bribes which will immediate gain money at the expense of losing social credit score (similar to Social Credit System). Failing to pass a mission will lower credit score. A loss of social credit can prevent the player from gaining more jobs and damage their progress, and will result in the player being deported if the score reaches zero, ending the game. After every mission, the player returns to their flat to interact with characters, pay any outstanding rent and to purchase any items that they may need. While playing the game, the player must make decisions which will affect the story through various characters that can be encountered.

The game starts with an explosion at a public event with a destroyed London Eye on the Thames. During the rule of the far right Albion First party, which later breaks from a conservative coalition to form its own government via election rigging, the player is working as a bouncer taking tickets at the British Museum of History celebration event until it is blown up. Soon after the explosion, the game goes back an entire year to when the character must earn enough to prevent his deportation and eviction. The player is referred to as Person of European Heritage #112. The player must spend the year leading to the ultimate events using the BouncR app via the government issued phone to gain employment, all while being monitored by presiding officer, Jupp. The player can make various decisions to either support the government or the resistance.

Not Tonight received mixed to positive reviews. Review aggregator Metacritic has a total review score of 71/100, based on several submissions. Wccftech gave it a positive score of 80. PC Gamer later giving it 71. Screen Rant gave an independent review of 4 out of 5 stars. Trusted Reviews summarized "Not Tonight proves that the Papers, Please formula can work in a less Soviet setting, but the experience is slightly diminished by the transplant. Yet its eccentricities remain endearing, with characters, landscapes and a haunting sound of muffled music that will be rambling around my skull for a little while yet."

Many reviewers have mentioned the likeness of the game to that of Papers, Please.

(0) Comments on "Not Tonight Full Version"