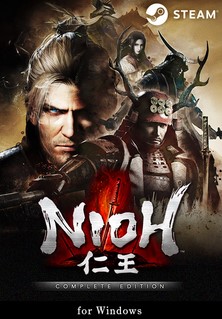 Nioh (Japanese: 仁王 Hepburn: Niō, "benevolent king") is an action role-playing video game developed by Team Ninja for the PlayStation 4 (PS4). It was first released worldwide in February 2017, and was published by Sony Interactive Entertainment internationally, and Koei Tecmo in Japan. An edition for both PS4 and Microsoft Windows, containing all the game's downloadable content (DLC), was released in November 2017 by Koei Tecmo.

Set during a fictionalised version of the year 1600, the plot follows the journeys of William, an Irish sailor who pursues the sorcerer Edward Kelley into the final battles of the Sengoku period during Tokugawa Ieyasu's efforts to unify Japan, an effort complicated by the emergence of yōkai that are flourishing in the chaos of war. Gameplay revolves around navigating levels and defeating monsters that have infested an area; combat revolves around stamina or "Ki" management and different sword stances that are strong or weak against different enemies.

Nioh began development in 2004 for the PlayStation 3 as part of a multimedia project based on an unfinished Akira Kurosawa script. The project went through a turbulent and prolonged pre-production period, going through multiple revisions until its final version began development in 2014 for the PS4. The story was based on the life of historic Western samurai William Adams, although it was embellished with supernatural elements. Development information was sporadic until 2015, when it was reintroduced to the public.

Alpha and beta demos were released during 2016, to both gauge public reaction to the title and make adjustments based on feedback. Initially scheduled for a 2016 release, the adjustments pushed the release into the following year. Upon release, Nioh received positive reviews, with praise going to the gameplay and graphics while the story was criticised as lacking or confusing. It reached high positions in sales charts, going on to ship 2.5 million copies worldwide. A sequel for PS4, Nioh 2, is in development.

Nioh is an action role-playing game set in Japan during the year 1600, with players taking the role of an Irish samurai named William. The player guides William on missions through enclosed environments fighting both human enemies and supernatural beings called yokai: missions are self-contained, hold alternate routes William can navigate, and selected from a menu rather than reached by navigating an open world. While navigating environments, William can find various collectables both in crates scattered through the environment and in other places within the environments such as fallen soldiers. These collectables include Amrita, the game's experience points (EXP); gold, the in-game currency; new weapons and armor, and consumable items such as bombs. Weapons and armor found in the environment can be taken to a blacksmith, who are able to buy it from William or can break it down into base material. Shrines scattered through levels act as checkpoints, allowing players to save progress, replenish health and raise William's experience level through accrued EXP: doing this respawns all normal enemies within an area. Skill points acquired in combat are assigned at shrines.

Fighting is based around hack and slash combat, with William being able to attack enemies and block their attacks in turn. William can run, dodge, and sprint with these and combat actions draining his Ki stamina bar. When his Ki has been depleted, William is left vulnerable to attack. If timed right, William is able to replenish lost Ki with an action called "Ki pulse". The Ki pulse also grants status buffs onto William, and dispels patches of miasma generated by yokai and other supernatural enemies which rapidly saps Ki. Defeated enemies drop loot, which includes money and weapons. The speed at which William can move through levels depends on the weight of his equipped armor; the heavier it is, the faster his Ki will drain. If William dies, all the EXP acquired up to that point is left where he fell, and he must travel back to retrieve it, but if he dies again and therefore failing to reach it, the amount of EXP dropped is lost and the spirit animal is automatically recovered.

William has access to multiple types of melee weapons: these include single and dual swords, axes, polearms and kusarigama. In addition to melee weapons, William has access to ranged weapons such as a bow, a rifle, and a hand cannon. The more each weapon is used, the stronger and more effective it becomes. In combat, William can change between three Stances with melee weapons, with each stance having different effects; High Stance causes higher damage while lowering defense, Low Stance allows for quick attacks and better defense, while Middle Stance balances elements of the other two Stances. These Stances also consume different amounts of Ki depending on their attack strength. William can also summon Guardian Spirits, animals which combine his health and Ki into a single meter with added stat boosts such as increasing attack power or defense. Each Guardian Spirit boosts different stats, and can only be switched out at shrines. Guardian Spirits are also lost when William dies, but they can be summoned to him at a shrine at the cost of his lost EXP. In addition to normal enemies, William can summon Revenants, hostile ghosts based on other fallen players, to battle and gain experience, money and items. A cooperative multiplayer allows for other players to be summoned to help in battles.

William's character growth is governed by EXP. Some statistical points can be assigned to William's character following the game's opening mission, and during the main game stat points can be assigned to William's attributes, which range from increased physical strength to heightened speed. Stat points are split between three skill trees: "Samurai" for weapon skill trees for standard melee combat, "Ninja" for distance weapons such as shurikens and poisons, and "Onmyo" which link to the creation of talismans, consumable items which grant temporary stat boosts. If William finds and guides Kodama to the Shrines within each mission, he can purchase otherwise inaccessible bonus material such as items and weapons. Offerings of items can be made at the shrine in exchange for EXP. Additional buffs can be granted using Prestige Points, which are acquired by fulfilling certain tasks within levels such as dealing a certain amount of damage or killing a number of enemies with one weapon type.