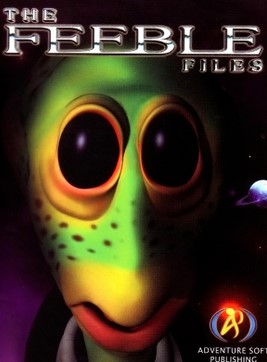 The Feeble Files is an adventure video game about the adventures of an alien called Feeble. The game is a science fiction comedy, with a similar style of British humour to that of Adventure Soft's previous games, the Simon the Sorcerer series.

The game was made available for DRM-free digital distribution from GOG.com on December 30, 2008.

Graphics: The game is presented in pre-rendered 2D graphics at a much higher resolution than the Simon the Sorcerer games series. However, given the five-year gap between its original UK release and the US release there have been several claims that it looks dated.

Voice acting: To bring Feeble's world to life several famous actors were recruited to provide the voices. Feeble was voiced by Robert Llewellyn from the BBC comedy Red Dwarf (after previously having co-star Chris Barrie as Simon the Sorcerer), and Blake's 7’s Peter Tuddenham provides the voice for the Oracle.

Interaction: For interaction the game uses a point-and-click navigation system synonymous with adventure games. The player is in control of the main character, Feeble, and must solve various puzzles to advance through the game and complete his quest. However, the player eventually gets the opportunity to use SAM, a robot with a penchant for genocide, to solve certain puzzles in the game. When using SAM the players cursor changes and different options are available to interact with objects in the environment, adding more depth to the gameplay.

At one point during the game the player must win several arcade games in order to advance, however these games use completely different gameplay methods and often proved to be very difficult for players. In the end Adventure Soft released a saved game just after the arcade section to allow people to carry on playing.

The story and puzzles within the game are all of a linear nature.

Music: Unusually for this type of game, there is no background music during gameplay segments, only ambient sound. Cutscenes, however, have full music soundtracks.