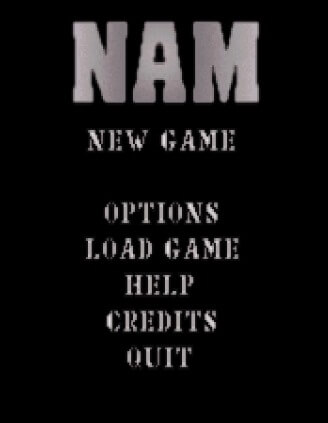 NAM (also sold under the name Napalm in Walmart retail outlets) is a commercial Build engine first-person shooter video game set during the Vietnam War, developed by TNT Team and published by GT Interactive Software. It originated from the creation of TNT Team's 1997 total conversion mod for Duke Nukem 3D titled Platoon. It was picked up by Infogrames, who put them to work on a remake with more professional art and some custom source code modifications by Matt Saettler, product manager for Blood, which resulted in NAM. The game was released on July 31, 1998. U.S. Marine Sergeant Dan Snyder, who helped pioneer computer simulation training for American troops with a Doom army mod, was a consultant on the project. NAM was later re-released on Steam on November 6, 2014, with Retroism and Night Dive Studios as the publishers.

The game itself is very similar to Duke Nukem 3D. The game consists of 34 levels divided into four episodes; there are two single player episodes with fifteen levels and two multiplayer episodes with nineteen levels. Very little was changed in regards to controls, movement rate, physics, and CON (control file) language. The only immediately noticeable change in the game code was the removal of the remote detonator for weapon 6, the grenade, which was a pipebomb in Duke Nukem 3D. In the game, there are AI marines which will help the player in some levels, each with different classes and specialties. Mines are present in most levels, requiring players to activate his mine detector.

The player assumes the role of Alan "The Bear" Westmoreland, a United States Marine Corps Sergeant. The story begins with a deadly Viet Cong raid, where you are left to survive of your own accord. The player must deal with various firefights, ambushes, booby traps, snipers, air strikes, anti-personnel mines, and more in order to finish their way to the end of each level.

The player is placed in the center of the Vietnam war in 1966, playing as Westmoreland, who is a very deadly and highly trained U.S. Marine. Westmoreland is under the command of the Central Intelligence Agency and has undergone genetic engineering to become a super human war machine. He is given standard military orders, and is usually placed alone or with small teams, pitted against overwhelming odds. To prove himself a successful experiment, he must survive several tours of duty in order to show that the side effects of the serum can be overcome.

Next Generation reviewed the PC version of the game, rating it one star out of five, and stated that "This horrendous Duke Nukem 3D conversion should have stayed on the Net as freeware."

The game received "unfavorable" reviews according to the review aggregation website GameRankings.