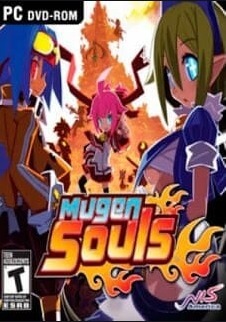 Mugen Souls (圧倒的遊戯 ムゲンソウルズ Attōteki Yūgi Mugen Souruzu) is an RPG developed by Compile Heart with collaboration from GCREST and published in North America and the PAL regions by NIS America. Certain aspects of the western release have been edited and some mini-games have been disabled. A sequel titled Mugen Souls Z was released on April 25, 2013.

The main protagonist of Mugen Souls, Chou-Chou, plans to conquer the universe by subjugating the seven worlds it comprises, as she thinks the planets look pretty. Traveling from world to world with her trusty companion Altis, and loyal peon Ryuto, Chou-Chou aims to turn the heroes and demon lords of each world into her 'peons' (servants), saving the world from conflict in the process.

Mugen Souls Z is the sequel to Mugen Souls, released in Japan on 25 April 2013, North America on 20 May 2014 and Europe on 23 May 2014 for the PlayStation 3. The protagonist is Syrma, a goddess aiming to stop an awkward ancient threat. Gameplay aspects include level caps of 9,999, large mecha, and billion-point damage.