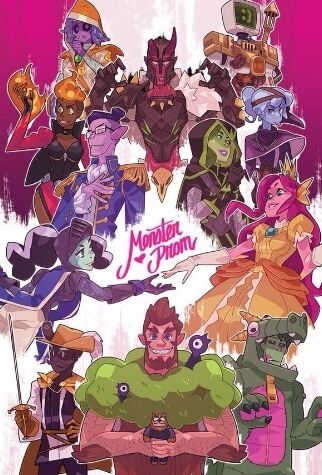 Monster Prom is a visual novel video game for Windows, macOS and Linux that was released on 27 April 2018. It is developed by Beautiful Glitch and published by Those Awesome Guys. It is written by Julián Quijano, Cory O’Brien and Maggie Herskowitz and illustrated by Arthur Tien. The game has been programmed by Elías Pereiras.

Monster Prom is a dating sim. The player can choose between six different monsters they can try to date. Each player takes their turn at going through an event in one of the map locations in order to gain stats that affect the way their love interest perceives them. It features multiple endings, items and mini-games. The player can choose to play as one of four pre-set characters. The majority of its humor is very Western-influenced, consisting of many pop culture references, banter-based dialogue, self-referential commentary on monster fiction, and light satirical themes.

The players are presented as students within "Spooky High", a high-school in a world inhabited by monsters. They are given a time limit of three weeks in order to convince their chosen love interest to take them to prom.

On 25 November 2016 the game successfully completed a Kickstarter campaign raising funds through 1,592 backers. On 14 February 2018 the developers announced the game would release on 27 April 2018 through a teaser trailer.

The game was nominated for the "Matthew Crump Cultural Innovation Award" and for "Most Fulfilling Community-Funded Game" at the SXSW Gaming Awards.