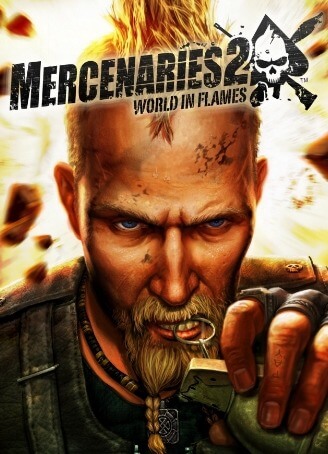 
Mercenaries 2: World in Flames is an action-adventure video game developed by Pandemic Studios and published by Electronic Arts for PlayStation 2, PlayStation 3, Xbox 360 and Microsoft Windows. It is the sequel to 2005's Mercenaries: Playground of Destruction. The game is a third-person shooter with an open world, set in a fictionalized war-torn Venezuela. The game's primary objective is to kill the President of Venezuela whose betrayal of the protagonist mercenary acted as a stepping stone to his current position.

The player can pick one of three mercenaries: Mattias Nilsson, an ex-operative with a love of explosives, Chris Jacobs, an amoral ex-Delta Force member with a cynical attitude, and Jennifer Mui, a former-MI6 turned mercenary who cares about nothing but money.

Helped in part via a contract with and subsequent betrayal of the mercenary, Ramon Solano becomes the Venezuelan President of an interim government following a military coup, and successfully builds the trust and support of the population via his "for the people" nationalization of the country's oil. The mercenary vows revenge on Solano, and must work their way towards this by performing contracts for various conflicting factions across Venezuela.

In preparation for the release of Mercenaries 2, Electronic Arts opened a commercial campaign in August 2008, with scenes of the plot of the game in a stylized world, featuring background music reminiscent of a "hip-hop musical" singing about how the protagonists are going to get revenge for being double crossed and getting no pay to boot. The song was written and performed by the Wojahn Brothers and was released as a single on September 23, 2008.

EA took over the Last Stop petrol station in Finsbury Park, North London, on the release day of the game in order to give away £20,000 worth of petrol for free, with each driver receiving a maximum of £40. The petrol station was transformed into a military bunker, with sandbags, oil barrels and jeeps. The area's member of parliament, Lynne Featherstone, described the campaign as an "ill thought-out media stunt" after it created unnecessary traffic congestion.

The demo of the game became available after-release on September 18 on the PlayStation Network and Xbox Live.

On September 30, 2008, Pandemic Studios announced that they were working on a free patch, called "Total Payback", that would add six new playable characters, cross-region co-op, and cheats. It was scheduled to be released on October 13 on Xbox Live, but was delayed until October 23 and again until "early November." The patch was released on October 23 for PS3 and October 31 for 360 users.

On December 12, 2008, the Mercenaries 2 DLC content pack "Blow It Up Again" was released for download on the PlayStation Store. Pandemic later stated that they are "working with Microsoft" to ensure that the Xbox 360 content pack is released promptly, to follow Sony's sudden release. The DLC had relatively little advertising and failed to even have an official announcement from Pandemic aside from a simple trailer available for download on the Xbox Live Marketplace. It has also been raised from free to $1.99.

The "Total Payback" patch and "Blow It Up Again" content pack have not been released for the Windows version.

Mercenaries 2: World in Flames received "average" reviews on all platforms except the PlayStation 2 version, which received "generally unfavorable reviews", according to the review aggregation website Metacritic.

Though praised for its colorful and destructive environments, many reviews have complained of "nagging annoyances" throughout the game that occasionally feel rushed and unfinished. One of the major problems was the unintelligent AI of both friendly and enemy NPCs, and the issue was aggravated by voice acting and repetitive lines. Some reviewers found several gameplay mechanisms questionable, such as the air supports and airstrikes being of limited value, over-powerful melee attacks, and simplistic faction dynamics. The reactions from the new co-op mode were divided; while another player added to the fun, there were limitations, such as the tether between players and limited role of the passenger when in a vehicle. Edge gave the PlayStation 3 version a score of six out of ten and said that it "remains an absolute blast." In Japan, where the game was ported for release on November 20, 2008, Famitsu gave it a score of one eight, one nine, and two sevens for the PlayStation 3 and Xbox 360 versions; and one six, one seven, and two fives for the PS2 version.

Mercenaries 2 was nominated for "Dubious Honors: Worst Game Everyone Played" by GameSpot in their 2008 video game awards, which was a category for games with large sales that had been panned by the critics. In addition, it won "Dubious Honors: Most Disappointing Game" by GameSpot.

The Lord of the Rings: Conquest
hit
upd
new