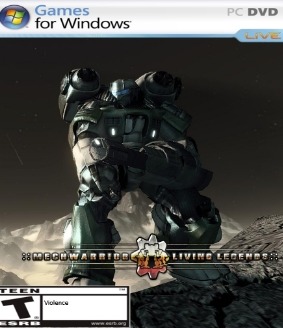 
Mechwarrior: Living Legends (also known as MW:LL or MWLL) is an award-winning, fan-created, multiplayer mod, based in the BattleTech universe, and using CryEngine 2 as its engine; it is one of the few mods based on the BattleTech universe (and its supporting Intellectual property) to have been sanctioned by Microsoft—who currently (as of 2011) owns the rights to the Mechwarrior video-game franchise—and additionally received pre-SDK support and sanctioning directly from Crytek, producers of the games' engine. On December 26, 2009, an open beta (version 0.1.0) was released via BitTorrent and other distribution methods. Because the project changes the play-style and feel of the game it is originally based on (Crysis and Crysis Warhead) so completely as to be unrecognizable in comparison, it is billed as a "full-conversion" mod, since little to no trace of the original game's art or play-style (besides the most basic menus seen when first loading the game) exists any longer within MW:LL. It was created by American developer Wandering Samurai Studios.

Mechwarrior: Living Legends is based in the BattleTech universe and began as a mod for Quake Wars. However, for a number of reasons, the team decided to switch to Crysis and continue development on the CryEngine 2. Not long after the switch, German Crysis developer Crytek announced that the team would be one of only four to receive the Crysis Software Development Kit (SDK) in advance.

The project was the recipient of the ModDB 2009 Mod of the Year award and - due to rules preventing one mod from winning the same award twice - an Honorable Mention in 2010 and 2011.

On Friday October 28, 2016 a new development team, unaffiliated with Wandering Samurai, released a 0.8.0 version of the game. This version was dubbed a "community edition" and resulted in two more hot fix releases with minor content changes before the end of 2016. Development has since continued at a steady pace, with version 0.9.0 released on October 15, 2017, bringing with it not only a massive amount of new content (including a self-updating launcher and game-patcher) but many improvements to the overall gameplay experience.

MW:LL is a network multi-player only game with no single-player mode. As such, it has no specific story and does not seek to establish canon. The game is limited strictly to the first person point of view, and focuses largely on vehicular combat, including the franchise hallmark BattleMech. Additionally, it is the first game in the MechWarrior series to allow players to operate a wide range of vehicles in addition to 'Mechs including tanks, hovercraft, VTOLs, and aerospace fighters. The game offers three game modes: Solaris Arena, a free-for-all deathmatch with announcer chatter and an arena setting, Team Solaris Arena, a team based deathmatch, and Terrain Control, an objective based game mode revolving around capturing bases for points or spawn tickets, similar to the Conquest game mode in the Battlefield series.

In 2014 MechWarrior: Living Legends was named by PCGamer among the "Ten top fan remade classics you can play for free right now".

All games from the serie "MechWarrior"