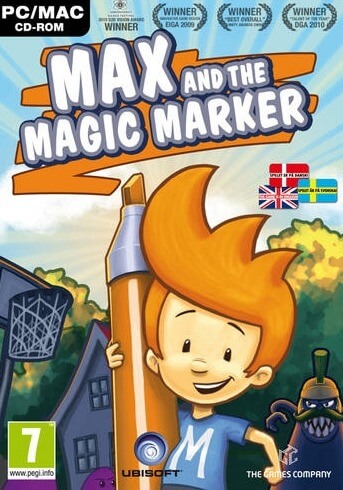 The protagonist is a boy named Max, who draws a monster with a special magic marker that he happened to come across. The monster comes to life, invades Max's drawings and begins wreaking havoc in them. Max must chase and get rid of the monster, with the help of the magic marker.

Max & the Magic Marker is a platform game with gameplay elements similar to Crayon Physics where the magic marker is controlled by the mouse and is used to create physical objects such as platforms and boxes to assist Max in his adventure. The Magic Marker is used by the player to create bridges, platforms and heavy objects to help Max cross caverns, rise up on moving objects, or be propelled in the air via a seesaw.

Upon release Max & the Magic Marker received mixed reviews and now holds a Metacritic score of 76/100 for the original WiiWare version.

A sequel, entitled Max: The Curse of Brotherhood, was released for download for Xbox One on December 20, 2013. Xbox 360 and Microsoft Windows versions were also announced, and released on May 21, 2014.

Magic: The Gathering – Duels of the Planeswalkers 2015
hit
upd
new