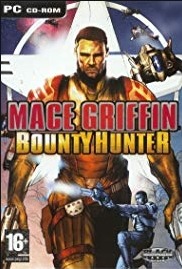 Mace Griffin: Bounty Hunter is a first person shooter video game developed by Warthog Games and released for the PlayStation 2, Xbox and Microsoft Windows. A GameCube version was in development, but was eventually cancelled.

One unique feature is the ability to switch between on-foot FPS combat to spacecraft dogfights seamlessly, with no loading times during such moments. This is extended to being able to move away from the controls and walk around during flight as the ship continues on its course. Each weapon also has an alternative fire. For example: the four-barrel shotgun can be fired as a single shot or a burst from all barrels. The semiautomatic pistol can also be fired in a three-round burst or fully automatic.

It develops as a series of missions Mace Griffin (voiced by Henry Rollins) is given while working for the Guild of Bounty Hunters. During these seemingly unrelated missions, Mace discovers a dark conspiracy taking place in the Vagner System involving the appearance of mysterious black wormholes while he is out for his own form of justice: revenge for being thrown into jail years earlier through an act of betrayal. He must seek out and destroy those who have wronged him.

Three different races populate the Vagner System, all settlers from their own home systems. These are humans, the Jaldari, large gorilla-like humanoids and Valleakan, green lizard-like humanoids. All three races are at peace and mix freely together throughout the universe.

The game received "mixed" reviews on all platforms according to video game review aggregator Metacritic.