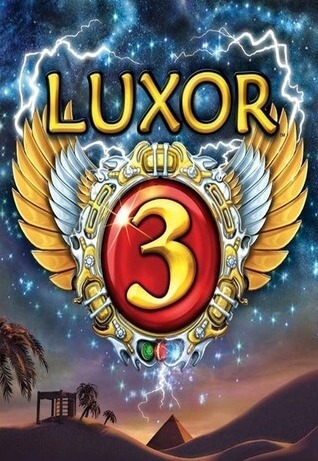 Luxor : Reverse to Egypt (known as Luxor 3) is an action-puzzle computer game released by MumboJumbo and Wamoc. It is a sequel to Luxor and Luxor 2. As with the other Luxor games, it maintains an Egyptian theme and revolves around Egyptian deities, with a main gameplay goal of removing spheres in various lines of spheres on a set track by exploding groups of three or more spheres.

The game remains similar to that in previous editions of Luxor: the main objective is to remove spheres of many different colors (ranging from four to nine different colors) from a track of spheres before they enter the pyramid at the end of a track. The lines of colored spheres are held by a scarab at the back end, and a set number of these sets must be cleared.

Luxor 3 features canopic jars that show up in the middle of the game: they will show up multiple times in each level until it is collected by being shot at by a sphere. Collecting all of these in the first four classic mode levels of each stage will unlock a bonus level at the end of the stage. After a jar is collected in a level or if all four jars are collected for a stage, then the remainder of the level or stage, respectively, will have golden scarabs show up to be exploded as with the jars. The golden scarabs drop from three to six ankh coins depending on the game's difficulty level (Easy, Medium, Hard, Insane). At the bottom of the screen is a bar displaying the current statistics and active power-ups for the level. The easy level don't have any Scoring bonus but the Medium, Hard and Insane has the Scoring bonus. Respectively (1.5X scoring bonus = Medium), (2X scoring bonus = Hard), (2.5X scoring bonus = Insane)

Power-ups can be upgraded (in length of time or in size of impact) by purchasing such upgrades in the store of the game. The unit of currency is Ankh coins, which are earned by collecting these coins as they fall in the middle of the game from large sphere explosions. Many Power-ups can be upgrade from 4 level such as (Lightning bolt, Fireball, Net, Slow, Speed shot, Reverse, Stop, Color cloud, Scorpion, Match Highlighter and Pyramid blocker). But the power-ups like (Wild, Color bomb and more...) you can not upgrade them because they're Upgraded to finally level.

You can buy the new Spheres styles for example (Wooden set, Glass set and energy set). The Ball holder (Horus wing) Can be changed too. There are 3 models to design your gameplay. The name of the wings are (SCI-FI, Xtreme! and default selection)

There are multiple game play modes available from the main menu: adventure, classic, survival, puzzle, and onslaught modes. In adventure mode, the main plot revolves around the evil Set wreaking havoc amongst the many Egyptian gods and goddesses. Each stage revolves around protecting a particular god or goddess and their power. The adventure mode is a total of 99 levels plus extra bonus levels. There are four difficulty levels. They are Easy, Medium, Hard, and Insane. Playing on harder difficulties earns more points.