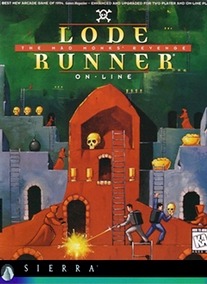 
Lode Runner Online: The Mad Monks' Revenge (stylized as Lode Runner On-Line) is an enhanced version of the 1994 computer game Lode Runner: The Legend Returns. As the title suggests, the game features online functionality so that players can battle or work together from remote locations in network games. The game is an example of the trap-em-up genre, which also includes games such as Heiankyo Alien and Space Panic.

In 1993, Presage Software acquired the rights to the classic Lode Runner game by Doug Smith and set out to create a new, updated version for modern machines.

The result of this effort was Lode Runner: The Legend Returns. This game did phenomenally well, winning many awards and leading to an enhanced edition: Lode Runner Online. For this iteration, multi-player gameplay was added, allowing two persons to play Lode Runner together over a network, modem, or on the same machine. At the same time many new levels and game elements were introduced, and the original 16-bit code was updated to 32-bit for Windows 95 and Mac OS 8.

While maintaining all of the original features of The Legend Returns, Lode Runner Online adds several new features as well, such as bombs which constantly self-ignite and reappear on a set timer. New available "worlds," which determine background and terrain appearance on a map, are a chief addition. New hazards, such as phase blocks, which disappear and reappear on a set timer (and consequently can tear apart players or monks standing in the location of a vanished block in the process of reappearing), and items are among other additional features; notably, editors can specify certain items to be able to be picked up by only the player of corresponding color (e.g. bombs with blue outlines can only be picked up by the second player, Wes Reckless, not Jake Peril).

The level editor is also more complex than in the original game. Including all of these innovations, an editor may place multiple exits throughout a level, and the exits can be programmed to lead to differing levels in a pack.

Lode Runner Online also fixed many glitches found in its predecessor, mainly that of monks getting stuck while chasing the player.

The original game's ending has also been expanded; in the former, Jake Peril had scavenged and travelled past all the game's levels, then walked a staircase up to the surface. In the reedition, Jake then enters the Mad Monks' headquarters; the monks are in full alert due to having lost track of Jake in the Lode Runner levels. Jake disguises himself using a robe and walks unnoticed in the building towards the exit. He then delivers one final blow to the monks by disconnecting the plug from the outlet that powered the monks' entire headquarters, before leaving.

All games from the serie "Lode Runner"