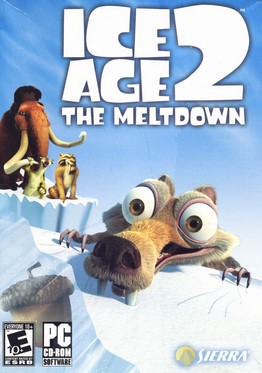 Ice Age 2: The Meltdown is a 2006 video game based on the film of the same name. It was developed by Eurocom and published by Vivendi Universal Games. It was released for PlayStation 2, GameCube, Xbox, Wii, GBA, DS, and Windows. The Wii version was released as a launch title for the console.

In this game, Scrat is caught up in the events of the film, Ice Age: The Meltdown and is trying to pursue acorns while interacting with some characters, some of whom help him in his quest. The game starts off by showing the icy areas where it began in the film and moving on to the woods, as well as exploring regions in the games such as the bowels of the sea reptile, Maelstrom, and swampy lands. In the game, Scrat occasionally allies himself with some of the main characters, and the player sometimes can play as either Sid or Diego, though not Manny. Characters which were shown as bit parts in the film are shown usually as adversaries or (in the case of one, a songbird) a guide to the next nut, though a select number of foes were not shown in the film at all.