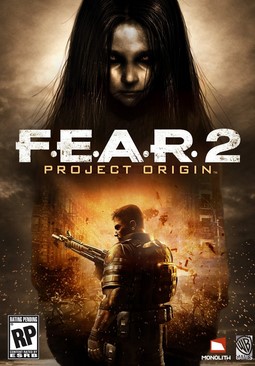 F.E.A.R. 2: Project Origin is a first-person shooter horror video game, developed by Monolith Productions and published by Warner Bros. Games for Microsoft Windows, PlayStation 3 and Xbox 360. It is the sequel to F.E.A.R. and is the second game in the F.E.A.R. series. It was released on February 10, 2009 and was made available on Steam two days later on February 12, 2009. An expansion, F.E.A.R. 2: Reborn, was released on September 3, 2009.

The F.E.A.R. 2 gameplay maintains the core elements from the original, including slo-mo combat, martial arts attacks, and enhanced A.I. The A.I. from the original F.E.A.R. was known for its exploitation of the environments, taking cover behind pillars and knocking down tables, and many of these behaviors have been retained for the sequel. New features in the game include iron sight aiming, creating cover by pushing objects, and the ability to use mechs during vehicle segments. The ability to lean and walk have been removed. Project Origin features a more diverse cast of enemies, as well as more encounters with supernatural enemies.

F.E.A.R. 2 does not allow the player to manually save and features a single save slot that relies on a checkpoint system. However, the game allows the player to replay any level from the main menu after first completing that level.

The sequel to F.E.A.R. continues the suspense story of the undead psychic Alma Wade, whose rage against those who wronged her causes an escalating paranormal crisis that threatens to devour and replace reality with her own. Instead of playing as the Point Man, the game's protagonist is Michael Becket, a Delta Force operator whose squad is sent in to take Armacham Technology Corporation (ATC) President Genevieve Aristide into protective custody approximately thirty minutes before the ending of F.E.A.R.

During the climactic events of F.E.A.R., a Delta Force team is deployed to take ATC President Aristide into protective custody from her penthouse apartment in Fairport. Upon arrival, the penthouse is attacked by ATC Security's black ops, dispatched by the Corporation's Board of Directors. After saving Aristide, operator Michael Becket uncovers hints of a project known as "Harbinger", which involves himself and several of his teammates. Aristide claims that Becket and his team are the only way to stop Alma, but before she can elaborate, the F.E.A.R. Point Man detonates the Origin Facility's reactor. Becket is knocked unconscious in the explosion.

When he recovers, Becket finds himself and the rest of his squad in a hospital deep underground, being operated on by a team of doctors under the direction of Aristide. The hospital comes under attack by ATC clean-up crews led by Colonel Vanek, and Becket must fight his way out. While escaping, Becket receives communications over his radio from a man who calls himself "Snake Fist". After escaping the hospital and confronting the commander of the ATC forces, Becket fights his way to the surface, where he encounters the reactivated clones of Replica troops. As he moves to the surface, Becket is repeatedly assaulted in hand-to-hand combat by Alma, who (according to Snake Fist) is trying to "absorb" Becket, drawn by the psychic signal he now emits after being psychically altered in an "attunement chamber" that Aristide tricked him into entering.

After reaching the surface, Becket regroups with what is left of his team, many of whom have been systematically killed by Alma. Now consisting only of Becket, his superior Lieutenant Stokes, Sergeant Morales, and Sergeant First Class Keegan, the squad moves to nearby Wade Elementary, a school now controlled by ATC Security, where Snake Fist and Aristide are hiding. Becket discovers that the basement of the school is another ATC research facility, for a project known as "Paragon." Here, Becket discovers that Project Harbinger was an attempt to create more psychic commanders similar to Paxton Fettel, a major antagonist from the original game, and that Becket and Keegan were the most promising subjects. It is during a confrontation with Alma in the school that she shows a sudden reaction to Beckett, creating a third "form" of a naked and sexually provocative Alma.

In the basement facility, Becket kills Colonel Vanek and finds Snake Fist. Snake Fist reveals himself as Terry Halford, a researcher for ATC, and explains that the only way to defeat Alma is to travel to an Armacham facility inside a nuclear reactor on nearby Still Island, which houses a device that can amplify psychic power. With this device, Becket can possibly defeat Alma with his own psychic abilities. As Becket and Halford prepare to head back to the surface, Halford is decapitated by a Replica assassin.

En route to Still Island, Becket's squad is ambushed by Replica troops, and Sergeant Keegan wanders off in a daze. Becket follows and tries to recover Keegan, but is instead delayed by Replica forces. After fighting off both the enemy soldiers and more of Alma's assaults, he eventually reunites with the remainder of the squad underneath Still Island and heads for the ATC facility. Becket enters the psychic amplifier, and as Stokes prepares to power up the machine, she is shot by Genevieve Aristide. Aristide explains that instead of destroying Alma, she plans to seal Becket and Alma inside the device together, so Aristide can use Alma as leverage against ATC.