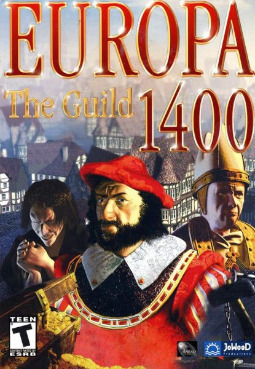 
Europa 1400: The Guild is a simulation game set in Europe from the year 1400 up to 1815. In it, the player tries to guide a family dynasty to power and wealth, starting from one character of limited means. Players can choose from a variety of initial businesses (including iron smith, tavern, church and thieves' guild) and historic cities (including Berlin and London). As the family business and social standing grows, more options become available, even high political rank.

4HEAD Studios and JoWooD Productions released a sequel, The Guild 2, in 2006.

Throughout the game, the player may indulge in intrigues, rise to a position in government, and obtain titles. Each title allows the player to upgrade their house by one level, which starts as a hovel and culminates in a palace. Each successively higher title increases the player's influence, allowing such things as sabotage, spying, blackmail, or taking opponents to court.

One of the main features of the title is the good and bad duality present in the various aspects throughout the character's life. The player may bribe people to get them on their side, or they may genuinely like them. The player may kidnap members from rival dynasties or forge alliances with them. This gives the game added replayability, since the scenarios are never the same.

Another prominent quality of The Guild is the nonlinear gameplay, or, the ability to extend the same game for a very long time if the player is careful and dedicated enough. Every time the player's current character dies, the heir takes his/her place as long as a certain age requirement is met.

In The Guild, the player may follow whichever career path they choose. These range from Blacksmith to Innkeeper, going through Thief and Money Lender as well as a few others. As the character ages and gets richer, the option to acquire new professions will emerge. In this way, the fourth generation of the player's dynasty might have access to more than four professions, while the first one will have only one. Each profession within a family has its own business establishment.

To run a certain business, it's necessary to possess the respective title given by an "association" (a guild of sorts). Titles enable the player to have an establishment but it also determines what type it will be. Titles also come with levels and the higher the player goes on the ladder, the better the businesses available become. The player may only apply for the next level (or first, in case they're not specialized in that job) of the profession when a given criteria is met.

Managing the player's business can be approached in different ways. The player is able to micromanage their businesses, such as by purchasing raw goods, choosing what to manufacture, and setting prices of goods. However, it is not necessary to do this in order to become wealthy. Players are also given the option to hire a manager and have their business run for them by this manager. This usually results in lower profits in the long run. Lastly, the player may assign certain tasks to their manager while retaining other tasks for themself.

In an attempt to keep the realism in the game, cities have limited space to build structures, be they residential houses or businesses. However, should the player choose to, it is possible to buy a property, tear the structure down, and erect a different type of structure. This feature greatly extends the possibilities of the game.

No matter what city the player chooses, the political structure is always the same. There's a Town Council that contains several different offices in different branches which are in a fixed hierarchy. Every time an office in the immediate upper level to the player's has an opening, the player is given the choice to run for it. When the character has no participation in the Town Council, they may submit their candidacy for the lowest level of office. The people occupying the offices above the one in question vote at the end of the year, and the candidate with the most votes gets elected.

Occupying a certain seat within the Town Council grants the player a set of privileges which are more beneficial as the office goes higher up in the hierarchy. For instance, while a Night Watchman might have the ability to arrest a citizen, a Judge is completely immune to any sort of lawsuit filed against them by their rivals.

Given the benefits that come with being in office, getting voted by their fellow citizens is often a hard feat to accomplish and there's always more than a few candidates to go up against. To get their way, players may opt for several different methods to secure their place, such as bribes, or by running for office where they know a member of their family is going to vote for them.

The Guild shipped 100,000 copies in its first week, although it was first erroneously reported as having sold-through this number of units to costumers.

Europa 1400 was a nominee for The Electric Playground's 2002 "Best Simulation for PC" award, but lost to MechWarrior 4: Mercenaries.