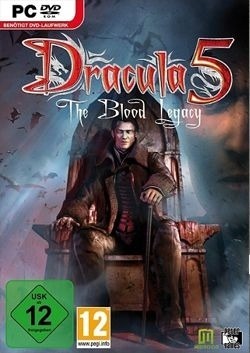 Dracula 5: The Blood Legacy is a 2013 point-and-click adventure video game developed by Koalabs Studio for Microsoft Windows, iOS, Android and OS X. It was published on all systems by Anuman under their Microïds brand. In 2014, the game was released on GOG.com and Steam, bundled with its prequel, Dracula 4: The Shadow of the Dragon.

The game follows 2000's Dracula: Resurrection and Dracula: The Last Sanctuary, 2008's Dracula 3: The Path of the Dragon and 2013's Dracula 4: The Shadow of the Dragon. The plot is unrelated to Resurrection and Last Sanctuary, but is instead the second of a two-part loose sequel to Path of the Dragon, continuing the story of Metropolitan Museum of Art art restorer Ellen Cross and her investigation into a mysterious portrait of Dracula. Ellen's journey leads her from New York to Istanbul to the Chernobyl Exclusion Zone, bringing her into contact with an ancient secret society founded by Vlad Tepes' brother Radu, and placing her in the middle of a 500-year-old conflict between the society and Dracula's followers.

The Blood Legacy received very little attention in the mainstream gaming press, with limited coverage from professional critics, and what reviews it did receive were negative. As with Shadow of the Dragon, the biggest criticism of the game was its length, but critics were also unimpressed with the plot, the graphics, and the identical gameplay to the previous game.

Gameplay in The Blood Legacy is identical to Shadow of the Dragon. The game is a first-person point-and-click adventure game, with a minimalist HUD; a quick-access item holder, which allows the player to use an item without entering their inventory. The main inventory is accessible by clicking on the hand icon beside the quick-access holder. As well as the inventory, the player has access to a list of objectives, records of all conversations, records of all documents seen and collected, a summary of relevant information acquired, and options for the player to quit their game, or load a previously saved game. The game employs an autosave feature, which is activated at certain predetermined spots, or whenever the player quits to the main menu.

The game uses a basic point-and-click interface to move the player around and manipulate the game world, with player's perspective controlled by the mouse, although the game is also fully touchscreen operable on compatible operating systems. Within each screen, the player is free to look around 360 degrees. As the player moves the cursor around the screen it can change into different styles depending on the situation; neutral cursor (no interaction is possible), an arrow (the player can move in the direction indicated), a mouth (the player can speak to the character over whom the option appears), an eye (an area or object can be examined in more detail), a hand (the player can take the object), a cog (the player must use an inventory item to initiate interaction with the object), a left-right horizontal arrow (the object can be moved left and right), and an up-down vertical arrow (the object can be moved up and down).

A gameplay mechanic not seen in the previous Dracula games (until Shadow of the Dragon) is a health system. The player character (Ellen Cross) suffers from a rare blood disorder which must be managed with medication. During the game, Cross' health continually decreases, and if it goes below a certain level, she becomes unable to move or perform tasks. The player has access to various types of medication throughout the game and can experiment with combinations to continually top off her health.

The game can be played in either "Adventure Mode" or "Casual Mode". In Casual Mode, interactive zones are automatically shown on-screen. Also in Casual Mode, after a set period of time elapses, players are given the option to skip puzzles. The game also features a points system and a series of in-game trophies, both of which are inactive if the player is playing in casual mode.

The game begins with the final scene from Shadow of the Dragon; Ellen Cross, an art restorer from the Metropolitan Museum of Art, opening the uncatalogued sixteenth painting from the Vambery collection, which she believes to be a portrait of Dracula. Ellen is shocked, however, to instead see a portrait of Vambery's assistant, Adam Stoker, Bram Stoker's great-grandson, which suddenly comes to life, as Adam grows fangs and lunges at Ellen. However, this is revealed to have been a nightmare. In reality, Ellen has returned to New York with the painting unopened. Back at the Met, Phillips tells her the Turkish police found no body at Yanek's, who probably cleaned out his apartment after discovering Ellen had broken in. As such, they still have no idea who Yanek is working for, and why he was in possession of several of the lost Vambery paintings. Meanwhile, Ellen opens the painting to find it has been tarred over with a black cross. Her colleague Gerry Berowski tells her people used to paint crosses in black tar on their doors to ward off vampires. As Vambery seemed to have been afraid of the painting, Gerry speculates Vambery himself may have painted the cross.

Ellen removes the tar, revealing the portrait of Dracula. She puts the painting in storage, and then reads an unpublished biography of Vlad Tepes, which portrays him in a more positive light than usual. The book says Vlad's brother, Radu, was responsible for the suicide of Vlad's wife, telling her Vlad had been killed in battle and giving her a knife with which to kill herself. Vlad never recovered from her death, and turned to evil soon thereafter. The book explains Radu hated Vlad because when they were held prisoner by Sultan Murad II, Vlad had been released fourteen years prior to Radu. The book also reproduces a letter written by Radu in which he says "since you've refused to give me the gift you have thanks to me, my death is only the beginning of your torture. My blood will remain restless for as long as my vengeance goes unsatisfied, and throughout your lifetime, danger hangs over you."

All games from the serie "Dracula"