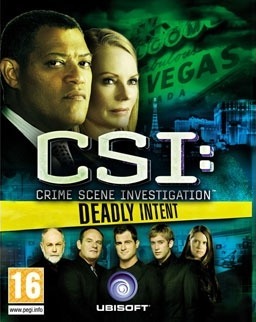 CSI: Deadly Intent is a computer game based on the CSI: Crime Scene Investigation television series. It's the seventh CSI game released, including CSI: Miami and CSI: NY. It was released for Microsoft Windows on October 20, 2009, and for Xbox 360, Nintendo DS and Wii on October 27, 2009.

The game corresponds with the 9th season of the television series and includes the characters of Raymond Langston and Riley Adams.

The Nintendo DS version of this game is called CSI: Deadly Intent - The Hidden Cases and was developed by Other Ocean. It includes four original cases created exclusively for that platform.

In case 1, a bride named Lynn Bowder has been murdered in a hotel room. Your partner in this case is Nick Stokes. The suspects are a Vegas visitor named Airam Dominguez, the night manager of the hotel, Charles Steer and victim's old friend, Kathy Burd.

Case 2: Coulda Been A Contender

A referee named Rick Shimada was found dead in the fighting ring. Your partner in this case is Greg Sanders. The suspects are an angry fighter named Hank Hackett, a mysterious ring girl named Tina Allens, and the league owner, Horace Willingham. Suspect Hank Hackett is murdered halfway through the investigation, making it a double homicide.

A female TV host named Clarinda Jackson was found drowned to death in a rehab center spa. Your partner in this case is Dr. Raymond Langston. The suspects are the victim's lover, Steven Tampson, her husband, Ernest Goldwasser and a TV rival named Jack Shell.

A famous fire-breather named Andrew Levesque was found dead. Your partner in this case is Riley Adams. According to the autopsy report, the victim was already dying of cancer and it seems the victim was abusive and violent. The suspects are the victim's landlord, Dr. Vincente Manoto, his wife, Ardell Levesque, and his 18-year-old stepson, Lyle Fitzer.

A female impersonator named Wallace Bieganowski under alias of Miss A was found dead in a nightclub. Your partner in this last case is Catherine Willows. The victim was identified as a superstar but other identification turns to out to be the victim's friend and manager. This murder was staged like a serial killer from 1975. This killer was known as the Barbor Street Boozer. He got this name because he tied his victims down and poured whiskey down their throats until they died of alcohol poisoning. The suspects are the superstar known as Marcelle (real name: Floyd Collister), a homeless man named Gary Beaumont and the detective that worked the case back in 1975, Lieutenant Juarice Briggs. At the end of a case you solve a celebrity murder and a cold case.

Case 1: Don't Try This At Home

At the set of the movie "Diamond Devils", an explosion occurs and a dead extra for the set falls with it.

"An unexpected explosion rocks a movie set with far too many accidents."

You work with Ray Langston.

The designer of a new casino is found dead on top of a sword on the casino's opening.

"The opening of Glass Works Casino is interrupted by a strange death."

You work with Nick Stokes and Catherine Willows.

An air gun fight ends with a man killed with a real one.

"Find out who brought a gun to an air gun fight."

You work with Greg Sanders.

Case 4: Of Cases Past

Unfortunately for you, your last suspect was found poisoned and you see that a therapist facility connects the culprits of your cases.

"Discover the shocking truth behind the murder of a familiar face."

You work with Catherine Willows and Riley Adams.

Broken Sword: The Shadow of the Templars
hit
upd
new