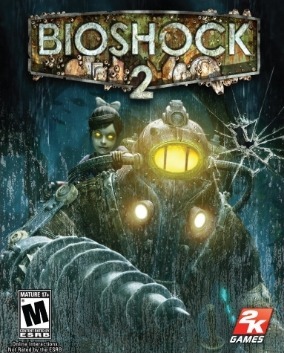 BioShock 2 is a first-person shooter video game developed by 2K Marin and published by 2K Games. A part of the Bioshock series, it is the sequel to the 2007 video game BioShock and was released worldwide for Microsoft Windows, the PlayStation 3, and the Xbox 360 on February 9, 2010. Feral Interactive released an OS X version of the game on March 30, 2012. Set in the fictional underwater dystopian city of Rapture, the game's story takes place eight years after BioShock. Assuming control of Subject Delta, a hulking Big Daddy, players are tasked with fighting through "splicers", the psychotic human population of the city, using weapons and an array of genetic modifications. The game also introduces a story-driven multiplayer mode called Fall of Rapture, which takes place during Rapture's 1959 civil war, before the events of the first game.

The game received positive reviews upon release, with praise directed at the game's narrative, art style, characters, ending and gameplay. However, the game attracted criticism for having a slow start and being too similar to its predecessor. The game was supported with downloadable content upon launch, and a new single-player campaign, titled Minerva's Den, was released in August 2010. The game sold more than 3 million copies, but did not meet Take-Two Interactive's sales expectations. A remastered version of the game was released in 2016, as part of BioShock: The Collection.

BioShock 2 is presented as a first-person shooter, with the player taking on the role of Subject Delta, a prototype for the Big Daddies 8 years after the events of the first game. As in BioShock, the player explores Rapture and fights off splicers, the remaining psychotic human population of the undersea city, using a combination of the environment, weapons, plasmids, and tonics. Plasmids and tonics are special genetic-reencoding liquids that grant the user active or passive abilities, respectively, and include many of those introduced in BioShock as well as new ones. For example, plasmids can give the player the ability to use telekinesis or to invoke fire, while tonics can improve the player's movement speed, attack damage, or damage resistance. Several of the weapons in BioShock 2 were previously seen carried by Big Daddies in the first game, including a powerful drill and a rivet gun. The player can use each weapon in a close-range melee attack, unlike in the first game, and is able to equip a weapon and a plasmid at the same time, which they can use in quick succession to destroy enemies. For example, the player might freeze a foe using a plasmid then shatter it using a spear gun. If the player is killed, they are revived in the most recently visited "vita-chamber."

As the player explores Rapture, he will collect ammo, health, recovery items, money and EVE (a liquid used to power plasmid use). Money can be used to purchase more items at vending machines scattered around the city. The player will also encounter security systems which can be hacked through a mini-game; this requires the player to stop a quick-moving needle one or more times in the correctly colored areas of a gauge. Stopping it within a green area progresses the sequence or potentially ends it; stopping in a blue area may grant a bonus to the hacking result, landing in a white area shocks the player (dealing a small amount of damage); and landing in a red area causes a security alert. The player also gains access to a research video camera. In BioShock 2, once the player begins recording an enemy, the player has a short time to damage that enemy in creative ways in order to score a number of points, which are then added towards the total research points of that enemy type. At various levels of research, the player is rewarded with new abilities. Certain areas of the game take place entirely underwater, limiting the actions the player can perform.

All games from the serie "BioShock"