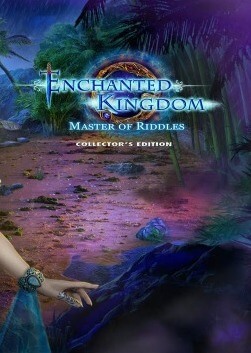 Your grandfather was a powerful wizard, one of the best in the Arcadian Empire. Before he unexpectedly passed away, he realized the power that his magic holds, both for good and evil, and so sealed his magic into three pearls, protected by Arcadian riddles. Can you, his only grandson, solve the riddles and protect Arcadian from the incoming war?

Enchanted Kingdom: Master of Riddles takes the hit fantasy series from Domini Games to another level with a thrilling premise. With its epic scope, fascinating characters, and rich backstory – it is easy to get lost in the game and let it immerse you. However, the game’s large scale might be a double-edged sword.

While the storyline is obviously quite thrilling, having so many different elements stuffed in a single casual game does not allow the game to fully explore many of the ideas. There are plenty of underdeveloped ideas, which makes parts of the game feel a little all over the place.

No matter what you feel about the storyline, there is no denying that the sights and sounds in the game are stunning. Although the scenes are not as imaginative as those in some of the studio’s past works such as Labyrinths of the World: Hearts of the Planet and Fatal Evidence: The Missing, the high-quality graphics and vibrant colors are still enough to gel the game together.

The soundtracks are appropriately magical and the sound effects help add some rhythm to the game. The voice-overs might be a tad robotic at times, but that is a minor issue in the bigger picture.

Unfortunately, Enchanted Kingdom: Master of Riddles also suffers from a major issue, which is how derivative and unoriginal the gameplay is.

The adventure portion of the game is riddled with recycled, repetitive tasks that even its fancy production cannot save the game from being dull. The hidden objects scenes and the puzzles are slightly more enjoyable, but still lack real challenge.

Enchanted Kingdom: Master of Riddles is around four-hour long, which is more or less a typical length for a hidden object adventure game.

Domini Games brings you a new exhilarating adventure in the Enchanted Kingdom series!

Long ago, the last powerful wizard sealed the kingdom’s magic with complicated riddles and hid them throughout the empire. With war on the horizon, you’ve been called to aid the Emperor in restoring magic to save your home!

But this will be no easy task. Your grandfather hid magic for a reason, and its power could be used for both good and evil. Do you have what it takes to travel the realm and save your home before it’s too late? Find out in this enchanting Hidden-Object Puzzle adventure!

Edge of Reality 7: Call of the Hills
hit
upd
new